Open letter to the good persons who invented DVR

Share All sharing options for: Open letter to the good persons who invented DVR 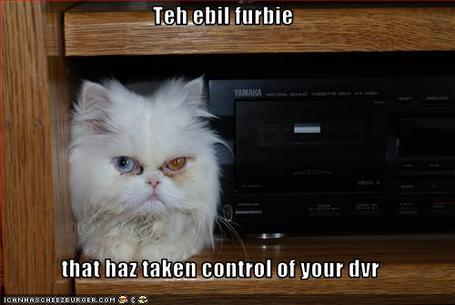 Thank you. Thank you for making TV completely different; for changing everything for the better. And I'm not just talking about the ability to catch up on shows and skip commercials; to take a chance on a show I wouldn't normally watch; to never miss an episode.

I'm talking about sports, and how viewing will never be the same.

I don't always get the chance to sit in front of the TV to catch a game. But as an addict, I never want to miss a second. Before, I would try to glue myself to the couch, keep drinks and food nearby and only get up during breaks. Then that lil' old DVR box came along.

Now, I don't have to watch terrible halftime shows. I can skip all the wasted time during a game. I can even start a game an hour early and catch up. I never have to see those same 10 commercials over and over. I feel like I'm getting FREE time in my life back.

And when I'm not around to see my team play, I can switch my phone off, stay away from the computer and see a game I wouldn't normally get to see; I can still be a fan during the game just like I was watching live instead of just reading the box score.

Mr. Crazy Lab Scientist Bro, thank you for giving me the power to go back and pause when our players do funny things, or there's a great sign in the crowd, or there's an incredible play. If Kevin Garnett or Nate Robinson swear, I can rewind and hear it. If an ESPN commentator biffs somebody's name or has an awkward exchange, I can watch it over and over. If there's an incredible or controversial play, I can see it again in an instant.

TV is changed, and for the better. It makes film study possible for bloggers and makes being a fan easier and even more fun.

So thanks. Keep coming up with crazy technological wonders, and I'll keep being in awe.