The drama is over: Tyler Lewis to NC State

Share All sharing options for: The drama is over: Tyler Lewis to NC State 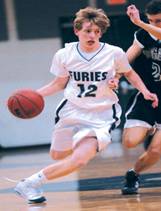 At the end of the day, it came down to the school that made him a priority. According to Forsyth Country Day head coach Craig Dawson, Tyler Lewis has committed to NC State.

The 2012 PG chose the Wolfpack among offers from Charlotte, Davidson, Miami and Wake Forest. Despite Wake Forest's Coach Bzdelik offering Lewis on Tuesday; it was too little, too late. Lewis visited State and attended the football game--and State was the place for him.

"After visiting with the coaching staff, players and academic support staff," Dawson said, "Tyler and his parents (Rick and Margaret) felt that NC State was the right fit for him."

Lewis enters his junior at FCD after being named to the Associated Press All-State team and a MaxPreps 2012 Second-team All-American, as well as receiving a number of other accolades and honors.

Wake continues its search for another point guard, and it appears that Braxton Ogbueze is the top target.