Share All sharing options for: Week 8 ACC Matchups and Predictions 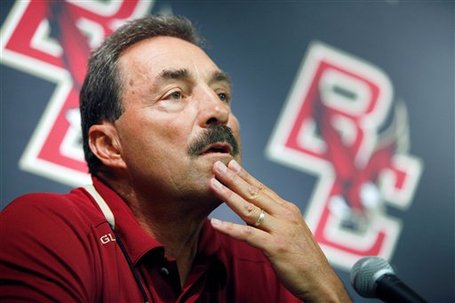 Since Wake Forest has a bye this week I figured I would focus on the ACC matchups today and maybe do some national stuff tomorrow.

We are looking at a good time this week to do a lengthy podcast to discuss the Virginia Tech game, as well as the state of football for Wake Forest.

Not the best weekend for the ACC with 3 teams (Wake, State, FSU) having their byes, and UVA playing 1 win Eastern Michigan. Nevertheless, here are some previews and my guesses at how the games will turn out on Saturday.

We all know how good Virginia Tech (slash how bad Wake Forest is?) after Saturday's throttling. On paper this looks like an absolutely huge mismatch, and it really is. Duke is the worst team in the conference and VT is arguably the best (definitely top 2). That being said, for whatever reason, Duke has kept it close the past two years against the Hokies. Duke's defense is just as bad as Wake Forest's, and that means that Virginia Tech will probably score a lot of points. Virginia Tech will certainly win this game, it is just a matter of how close it is going to be. A lot of that will probably have to do with whether or not Tyrod Taylor (who suffered a wrist injury after Beamer put him back in up 49-21), and Ryan Williams play, and just how much they play. I think that VT will get up big early but then become complacent/put backups in and that will allow Duke to make the score respectable.

These teams are coming off drastically different results. Maryland is looking rebound from a 31-7 at the hands of Clemson on Saturday, while Boston College looks to build off the momentum of a 24-19 loss @ Florida State. This one should be a pretty close game and may actually come down to the wire. There is a mismatch in the Boston College defense vs. the Maryland offense though. BC has had a tough defense this year, which isn't surprising given the tendencies of head coach Frank Spaziani. They baffled Christian Ponder on Saturday and made him look like a wet behind the ears rookie. There are questions for both offenses, particularly at QB, and whichever team has the more consistent play there on Saturday will probably win this game. I think Boston College forces a late turnover and scores in the last couple of minutes to wrap the game up and get their first conference win of the year. This game should be interesting for Wake Forest fans because these are our next two opponents.

In a game that is a rematch of the ACC Championship game last year, the Clemson Tigers are a surprising 5.5 point favorites. This is a bit shocking considering the records of the two teams, as well as the play over the past 3-4 weeks. Aside from the win over Maryland, Clemson continues to live up to their reputation of doing less with more than any team in the ACC does consistently. As Shakin the Southland points out, Clemson has much more talent over the past 5 years than GT brings in according to rating/recruiting services. Georgia Tech won the ACCCG ast year 39-34 and went on to take their beating to Iowa. Playing at home should no doubt help the Tigers, as well as getting Andre Ellington more touches. I think this game comes down to the wire but Clemson makes a big play to seal the deal with under 5 minutes left.

This is exactly the kind of game that Mike London's squad needs to get momentum for the final part of the ACC schedule. Eastern Michigan just won their first game since WWII on Saturday (slight hyperbole, I believe it was 18 games), and Virginia is coming off an old-fashioned beatdown to UNC-Ch(eat?). This game should never really be in doubt and the offense should have a great chance to start clicking for the Cavs.

In what will probably be the most entertaining game of the day on the ACC slate, the Tar Heels travel down to Coral Gables to take on the Miami Hurricanes. This is a critical game to see who is going to rise up and challenge Virginia Tech for the Coastal Division. A loss by Georgia Tech earlier in the day to Clemson could make it a two horse race the rest of the year. UNC has surprised a lot of people by playing well and winning games despite not having the majority of their defense due to unfortunate circumstances (and many other revelations since). Miami started off the year strong but then suffered a beatdown to Florida State at the Orange Bowl. They are more than likely looking to redeem themselves and get to the 5 win mark as well. I think the score will be closer than the 7 point line and am a little surprised it is that high. I am tempted to pick UNC outright, but I don't think my conscience will allow it.

There you have it folks, a look around the ACC and what we here at BSD think is going to happen. I will leave on a positive note by adding that Wake Forest's schedule looks very manageable the 2nd half of the season. If we can get our defense out of the triple digits in nearly every FBS ranking I think we have a real chance to go 2-3, or even get to 5 wins at the end of the year. This would be a huge boost going into next year and our very difficult home slate.