A fresh look at the Demon Deacon depth chart

Share All sharing options for: A fresh look at the Demon Deacon depth chart 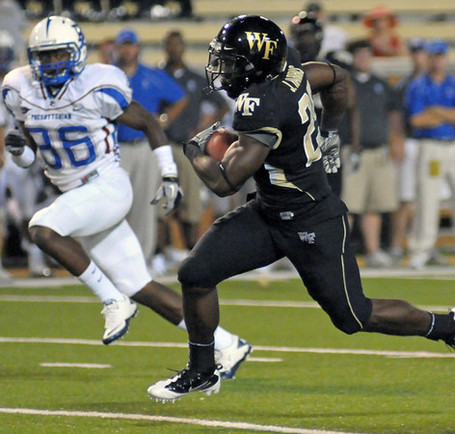 Heading into the Virginia Tech game on Saturday, Coach Grobe is looking to do something that will fire up the team and get them headed in the right direction following a four game losing streak. His plan is to get off to a fresh start if you will.

No less than 10 true or RS freshmen are on the 2-deep roster right now for the Deacs, including (Price, Harris, Johnson, Whitlock, Souza and Marshall) that are projected to start on Saturday. This is obviously a huge change from the experience factor that Coach Grobe goes with, even deviating heavily from the Georgia Tech game where Coach said he wanted to see what the older guys could do.

We'll take a look at the depth chart, particularly the freshmen, and highlight some changes that could make or break the game, not only on Saturday, but for the rest of the season as well.

Click through the jump for some depth chart analysis

It comes to nobody's surprise that Tanner Price remains the starting QB for the Deacs after a great performance on Saturday against Navy. 37-53 for 330 yards and 3 total touchdowns is absolutely nothing to scoff about, even though Navy was giving us the screens all day. I think that Price got shunned this week in the ACC Rookie of the Week voting. He should have received the award over Deandre Hopkins of Clemson. Price will have to play with the poise of a senior this weekend if Wake Forest is to have any chance at winning. Should anything happen to Price, Skylar is still holding down the second string position. I'm not sure how his ankle/foot is doing because I have seen him on campus walking with a slight limp and a protective boot on.

Josh Harris will make his first collegiate start in Blacksburg this weekend. In my opinion Josh Harris has earned this job through his performances the first 6 games of the year. He has a shown a tremendous ability to hit the holes, and combines a great touch of power and speed to garner his yards. Josh Adams should also see a good amount of time with the way that the coaches have been subbing in and out. Adams had a costly drop at the end of the Navy game and is looking to rebound with a solid game this weekend. Harris and Adams need to run well and hard early to open up the downfield passes on the Hokies tough defense.

Tommy Bohanon continues to start at the FB spot for the Deacs. Against Navy, Bohanon suffered a PCL injury to his knee, but because of his almost superhuman leg strength, he does not need surgery and should be ready to go against VT. Backing him up is the former walk-on Willie Dixon. If I am not mistaken, this is Dixon's first time cracking the 2-deep chart at any position. I am pretty interested to see if he will see any time on blocks because he certainly does not have the typical FB body. Very proud of what he has done to work his way up to this spot now. Classy Deac who embodies the spirit of a hard worker.

Williams will get another start at WR while Dembry backs him up. Marshall only caught 3 balls for 12 yards against Navy, but I want to take time to talk about another facet of his game; blocking. This goes unnoticed by almost everybody in the stadium, but I am sure that the coaches are talking about it and have applauded his effort. Williams is one of the better WR blockers that I have ever seen. On the many screen passes last weekend, Marshall Williams almost every single time engaged the defender on him and executed a perfect block without holding. This allowed Givens and Brown the ability to run behind him due to the great seal on the edge. Make sure you take the time to watch this tomorrow on the screen passes we call, it is a really great thing to watch and something that many people do not notice.

This is the skill position that gets the most look in our offense, especially if we continue to run the screens like we did on Saturday. Givens caught 7 balls for 60 yards and a TD on Saturday, while Brown caught 10 for 59 and a TD. I will commend the coaches for these statistics because it means we are getting the ball in the hands of our playmakers and seeing what they can do. I would like to see Camp utilized more at this position (4 catches for 44 yards against Navy), but the coaches are obviously doing what they can with limited positions for all of this great players.

Ford holds down the starting TE role for the upcoming game with Andrew Parker backing him up. These guys do an excellent job at blocking and doing the little things. I have seen some statistics from the previous years that shows a decline is throws and receptions by the TE for Wake Forest, and that has to change. Both of these guys can catch the ball and even do a little running after the catch. Ford has caught a pass in every game but the Duke game this year (6 catches for 64 yards), and is a great option in opponents territory to sneak out and grab one.

Remains the same with Godfrey, Looney, Nenon, Hoag and Weaver starting. This unit had their best outing of the year in my opinion against Navy this past weekend. They gave Price a lot of time to throw, and if I am not mistaken did not allow a sack. They will need to step up big time this weekend if Wake Forest wants to have any chance to win. If we run the screen offense that we ran last weekend, they need to engage and then move on down field to help block. I would love to see some trap runs and get our smaller O-linemen out there and blocking for the skill guys.

This is our most talented starting position in my opinion on the entire team. Wilber and Dorty have been nothing short of magnificent. Wilber showed his versatility the past two weeks by dropping back to an OLB role to transform our 4-3 into a 3-4 to help stop the option. Wilber ranks near the top of the nation in several statistics including TFL, sacks and forced fumbles. Honestly I am surprised that there has not been more hype, especially within the conference about Wilber.

Nikita Whitlock showed why he was the Texas 5A State DPOY in 2008 and what Grobe saw in him the past two weeks. Whitlock thrived against the option and I will eat my words when I said that I thought he would get manhandled up front against Tech and Navy. If he can continue to produce on a level of play that high, he can do special things here. I am a little worried about his ability to get past the bigger O-linemen of VT, but believe he can get low enough to force Evans and Taylor to the outside. Booi and Souza should both see a good amount of play too with a rotating lineup to keep Whitlock fresh. They will need to step up this weekend to stop the good running game of VT.

Woodlief gets another start at WLB with Riley Haynes still recovering from a knee injury. He has made the most of his opportunity with great games against GT and Navy. The whole linebacker corps has had a good two weeks. Haynes led the team in tackles against Georgia Tech. Mike Olson gets the backup role for Haynes, and I don't remember him being there before although I could just be mistaken. The linebackers will be pretty important against Taylor in terms of spying and dropping back in coverage. If they have a mental lapse Taylor will tear them apart.

This doesn't really come as a surprise to anybody who has watched Wake Forest play this year. The secondary has been the reason we gave up last minute touchdowns to lose the past two weeks. Grobe is clearly showing that this is not acceptable and this will either be used as a wake up call to Bush and Okoro or they will be replaced. With coveted recruit Merrill Noel coming in next year too after redshirting, all of these guys are looking to distinguish themselves in one way or another. I think the two freshmen could have a rough go against Boykin this weekend, but it will used as a learning experience. You never know, they could come in and shut the passing game down for the Hokies. That would be an extremely welcome surprise. I am pretty excited about seeing what they can do for us.

Quarles gets his starting role back and Mack falls completely off of the 2-deep roster, being replaced by Stamper. Mack has had some tough times in coverage, particularly in zone where he tends to rove a little too far away from his designated location. I think Quarles is ready to be back and Frye should have this secondary amped up. They should be extremely embarrassed for their performances the past few weeks and know that the time to change is now. If not, there is a ton of talent waiting to replace them.

That is an overview of the offense and defense 2-deep roster. The only special teams change is the lack of Campanaro in the KR unit (Brown and Givens are getting the call). This is very surprising to me because Campanaro is one of the top 30 KR's nationally in yards per return. Not sure if this means Camp will get a lot more touches on offense (I really hope so), or if he did something in practice this week that the coaches didn't like (or maybe even an injury).

As always, comments and corrections are welcome and conversation is a must! Go Deacs!