Decrypting the mystery of the transfer of Nikita Mescheriakov

Share All sharing options for: Decrypting the mystery of the transfer of Nikita Mescheriakov 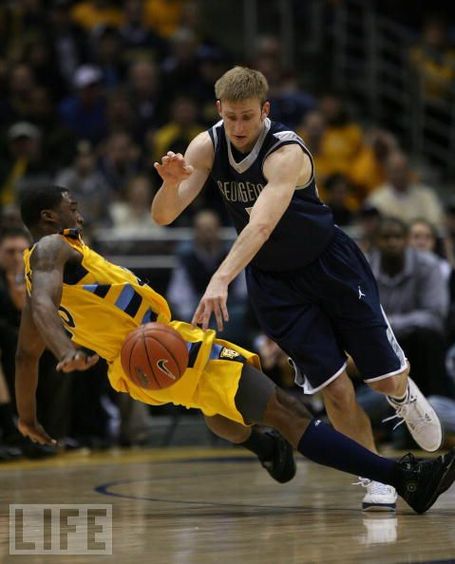 So the last thing I was expecting today was to read about someone transferring to Wake Forest. Ok, well not the last thing. Because the last thing I expected was Wake to take a transfer from Georgetown who averages 6 minutes, .9 points, .3 rebounds, is shooting 20% from 3PT and 25% overall. So what's the deal?
Want me to be honest? I have no freaking idea. Mescheriakov started some games last year, but didn't exactly do much. He played at St. John's in Maryland and averaged 14.4 points, 4.4 rebounds, 2.1 assists and two blocks, shooting 50% from the floor. He is a native of Belarus and his brother is named EGOR.

See where I'm going with this? Here is what the 6'7" 215 lb forward's coach had to say about him in high school:

‘‘He can shoot the ball well and he’s crafty,” Cheung said. ‘‘His offensive skill set is very strong, and he can play defense at a number of positions.”

So--"can" play defense really meant that he was able to be on the floor "covering" anyone from a shooting guard to a small forward to a power forward. He is supposedly a good three point shooter, but I've read reports that the guy can't hit a shot unless he's wide open. He's gunshy if there is anyone around him. He seems unathletic and not all that tough. His decision-making is, well, bad. I just don't see where he fits into the plans.

We asked Hire Escherick from Casual Hoya what the scoop on Nikita was and he said:

Here is the story on Nikita.
Everyone figured he was recruited as a bench player that would graduate and maintain Georgetown's GSR.  After red-shirting his freshman year, Nikita saw his first Big East action against Syracuse where he came off the bench and hit two three-pointers in two minutes.  All were shocked and intrigued.  He saw limited action during the next few games and then inexplicably made his way into the starting lineup, where he proceeded to become enemy number one of the Hoya Faithful.
No body control, no handle, no shot, no presence and no footwork.  Our lasting memory of him was taking the final shot against St. John's in the first round of the Big East Tournament last year, and hitting the TOP OF THE BACKBOARD. I'll repeat, the TOP OF THE BACKBOARD.
Earlier this season we kept a running count of how many times he had more combined turnovers and fouls than points.  I think it got up to five straight games before he was pushed to the end of the bench.
Have fun with that.

What does this all mean? I can only speculate (which really all of us can do right now), but I don't see him seeing the floor unless there is some magical quality that the coaching staff sees that just hasn't manifested itself yet. That, or if Mescheriakov is able to rub a magic lamp that lets him become the second coming of Peja.

There's the idea that we're just balancing out the scholarships, but I don't really get that either. Since Mescheriakov is a redshirt sophomore and he is sitting out next year, that would give him 1 1/2 years of eligibility and put him in AT&T's class--and we'd have to hold that scholarship until 2012. And I really would rather us use that scholarship for 2011. That class is loaded.

The positive to this is that he gets a year to learn the system, Wake is a completely different program (and school entirely) than Georgetown and he is an experienced player with Big East experience who can practice against our young guys next year. There have been plenty of people transferring out of Georgetown lately, so there's always the chance that he just didn't fit in with the team. I don't know if any of that is enough to warrant a scholarship on its own, but you never know, maybe the kid can put it together and provide some productive minutes. Stranger things have happened.

At best though, I don't see Nikki Boy being more than a small role player for the Demon Deacons. He supposedly can shoot well (emphasis on supposedly), but his defense, athleticism and overall court presence are suspect. Unless he is able to program the Goldeneye laser, my question to Dino Gaudio and the staff is: what is the endgame here?