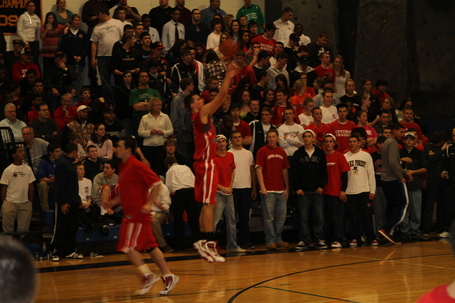 Last night I was able to make it out to watch future Wake Forest forward Carson Desrosiers as the Central Catholic Raiders took on Andover High School in Andover, Ma. In a game that was close until the end, Central Catholic downed my former high school 65-58. Carson put up 14 points, 17 rebounds, 7 assists, and by my count 6-7 blocks in the game. Desrosiers and teammate Jimmy Zenevitch powered the Raiders to victory in front of a hostile Andover crowd.

Click through to read some of my thoughts on Carson's game (and of course a video highlight).

My first impression was clearly how much taller than the competition he is at this level. That of course will give him a huge advantage on the boards and defensively for blocking shots in high school. We saw the same thing for Ty Walker as he entered Wake, and it may take some time for Carson to build the strength he will need to play defense in the ACC.

On the high school level he was able to use his size to be a monster on the glass last night, as evidenced by the 17 rebounds. His presence inside deterred a lot of drives from Andover, and multiple times when the Golden Warriors got in the lane, Carson was there to swat the ball away.

On offense, Carson had a sweet stroke knocking down his only three point attempt and going 3-4 from the free throw line. He has a soft touch on his shots and that is one of the reasons he could be able to come in and contribute early. He is 6-11 and from what I saw could shoot the ball comfortably. He also wasn't completely awkward handling the ball as one might expect out of a player that tall. At Wake there will be absolutely no reason for him to bring the ball up the court, but it looks like we won't see him dribbling the ball off his feet if he ever has to move with it.

One aspect of his game I came away very happy about is his ability to pass the ball. He made one glaring mistake that I noticed, when he tried to lob an inbounds from the baseline to half court and had the ball intercepted late in the game, giving Andover some momentum. But on the whole his passing was excellent. He threw a couple of sweet outlet passes leading to scores in addition to passing the ball well inside to cutting teammates. With his height he was able to see the floor well and get the ball to teammates in the right position. A few times Carson worked outside and fed the ball to Zenevitch inside for easy scores.

On the whole I came away excited from what I saw out of Carson, as big men with an ability to pass and shoot are not the easiest thing to find. Occasionally, it seemed as though he was taken out of the game (although he never sat a minute) because of Andover's game plan. Which at times was to drop even three players down on Carson when he caught the ball closer to the basket. But despite this added pressure Desrosiers stat line ended up being superb. Welcome to Wake Carson and I'm sure all Deacon fans are excited to watch you play in the black and gold next year. 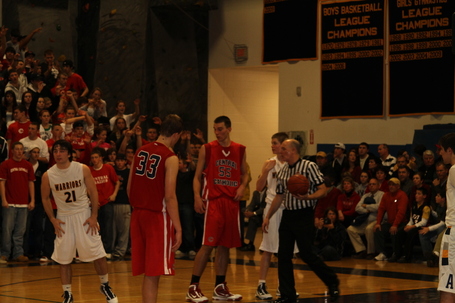