Share All sharing options for: State of the ACC: 1.6 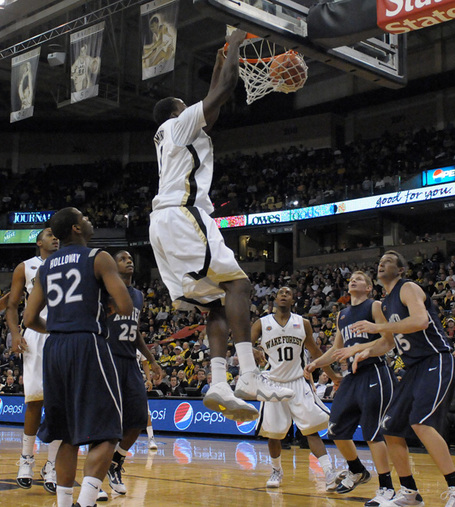 Rather than going through a power rankings this week, I'm going to give some quick hitters and rambling babble about what I've noticed in the ACC lately.

1.) Everyone who jumped on me for ranking GT too high in my last Power Rankings, consider yourself vindicated.

I saw the light after you guys mentioned it, and regretted doing so. And GT continues to slide. This should be Hewitt's last year and I really feel for GT fans. This team has just an incredible amount of talent. If you took Paul Hewitt's recruiting ability and gave Gary Williams that team, he could win a title with those guys. The Jackets are in trouble and it really was a bad day yesterday overall for the Wreck.

2.) There isn't a whole lot of doubt about who is going to win the ACC regular season title.

Duke seems like they're in a league of their own. They're efficient, they can amp up the defense, and outside of the Wisconsin slip up, Duke has won their games by an average of 29 points, with strong wins against Gonzaga, UConn, Arizona State and Clemson in there. Duke is #2 in the KenPom ratings and look like they have a good shot towards at least a 2-seed in the Tourney right now.

So we're at one of those years again, huh? Without a second dominant team in the ACC, there are about 6 teams that could finish within 2 games of 8-8. Florida State, Clemson, Wake, UNC, Miami and VT could all move up and down and it wouldn't surprise me one bit. This is one of those years where seeding could come down to tie-breakers.

4.) Boston College is in trouble.

And to think, I was slammed for putting them so low on my first power rankings. BC is getting beat by teams all over the Northeast--Harvard, Maine and Rhode Island. Their record right now will keep them out of the tournament unless they can somehow find a way to plow through conference play. Miami is their best win (20) and they have a few other decent wins scattered in there--Michigan, Providence and South Carolina--but they have some bad losses and 4 of their 10 wins are against teams in the 300s in the KenPom rankings. Al Skinner has performed miracles before, but this one is a tall order.

Since losing early games to Florida and Ohio State, Florida State has won seven straight. They don't have any bullet point non-con wins (although Marquette and Alabama look decent), but they are just steamrolling teams right now. Since beating GT, Florida State has won it's last three games by a combined 114 points. They're holding teams to 36.6% on 2PT and an eFG% of 39.1%. Those are insane numbers.

6.) There are no really bad teams in the ACC this year.

We like to kick around N.C. State and UVA (and Maryland here and there) this year, but when you look at the big picture, the ACC is a very strong league this season. All of the teams are in the top 100 in KenPom and the league as a whole is a combined 133-34. They also boast the highest average rating amongst all the conferences at .9080.

They may only have 4 losses, but UNC has two good wins (Ohio State and Michigan State) and their remaining wins have come to teams with an average KenPom of 228. The Heels need to get to 9-7 in conference to get to 20 wins and even then that might not be quite enough depending on who they beat in the ACC. A year after winning it all, there is a chance that Roy's Boys could be sitting in March.

I hate saying it because of the LOWF factor, but this Wake team is looking like a legitimate threat to finish in the top 4 in the ACC this year. They play really good defense, rebound the ball well and have strong guard play. That is usually a good recipe for success. They also have two freshmen who will only continue to get better as the year goes on (although there is always that rookie wall). KenPom predicts the Deacs at 8-8 in conference, and with non-con wins over Gonzaga, Richmond and Xavier and no really "bad" losses, that could be enough.