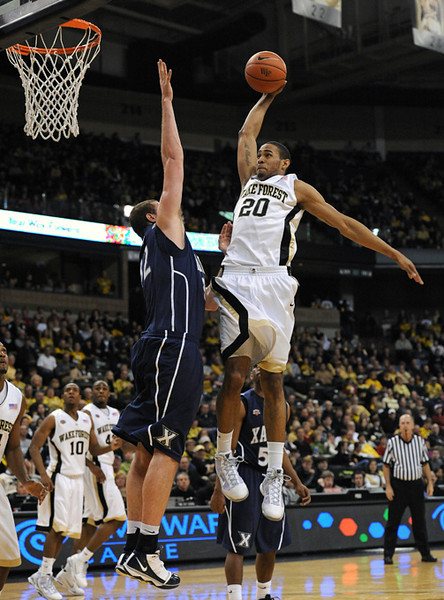 Haha Carolina. Links after the jump.

Bone, Opara leaving Wake Forest to turn pro
Two of the top players on the Wake Forest men's soccer team — defender Ike Opara and forward Corben Bone — have decided to turn professional and give up their final seasons of eligibility.

Inside Sunday's Box Scores - College Basketball Nation Blog - ESPN
1. A trio of interesting stat lines in Wake Forest’s 96-92 double overtime win over Xavier: * Al-Farouq Aminu put up 26 points and 18 rebounds in 41 minutes of action. That’s his second 20-point, 15-rebound game in the span of a week. He joins Texas’ Damion James as the only power six conference players with multiple 20-15 games this season. * In the first 102 games of his college career, Ishmael Smith never scored 20 points in a game. On Sunday, he poured in 28 in 49 minutes of action. It’s most minutes played by an ACC player since Toney Douglas played 49 for Florida State in 2008. * In the strange line department, Chas McFarland came off the bench to pull down 14 rebounds, but did not convert on any of his five field goal attempts. That’s the most rebounds without a field goal by any player in Division I this season.

Cincinnati.Com | Cincinnati Enquirer | Xavier Sports " More from Wake
Coach Chris Mack was asked afterward about those possessions. Said Mack: "Well, I thought we could have gotten a better shot at the end of regulation. Jordan took a jump shot that was contested and blocked. Both final shots were blocked – one going to the rim and one pulled up. But we wouldn’t have been in the situation that we were to win the game if it wasn’t for (Crawford). He made some terrific shots down the stretch. Because he had done that I wanted to put the ball in his hands. If I had to do it all over again, I would have really stressed to him, ‘Get to the rim.’ But he makes that shot in practice. And then I thought Holloway did what I asked and got to the basket and McFarland made one heck of a block to sort of seal it to go into double overtime."

Wake's C.J. Harris Named ACC Rookie Of The Week | Triad, NC
Wake Forest freshman guard C.J. Harris has been named the ACC Rookie of the Week after averaging 11.0 points and 2.7 rebounds per game and shooting 94.4 percent from the free throw line in the Demon Deacons' three wins last week.

FayObserver.com - Five things we learned about the ACC
5) Wake Forest is 2-0 in overtime this year and 4-0 in games decided by nine points or less. Coach Dino Gaudio believes that close-game success will be beneficial to the Demon Deacons in the long run. "Now when you come down the stretch, you've had success in winning tight games," Gaudio said. "I think there's a little bit of confidence that comes along with that." Gaudio has been most impressed with the poise of his seniors - starters Ish Smith, L.D. Williams (below) and Chas McFarland and reserve big man David Weaver. "When you have that experience, it helps you in those close games."

ACC Hoops Power Rankings, Jan. 4 Articles
3. Wake Forest (11-2, 1-0) Maybe the Demon Deacons won’t miss first-round picks James Johnson and Jeff Teague as much as we all thought. A double-overtime triumph over Xavier has given them seven straight wins. Schedule this week: Saturday at Miami

Smith powers emotional Wake Forest past Xavier in 2OT | Sports - Burlington Times News
Smith, now a senior, seized the reins of an emotionally charged roller coaster and delivered a signature performance while guiding Wake Forest past Xavier 96-92 in a double-overtime thriller at Lawrence Joel Coliseum. "Coach P has meant so much to me," Smith said, after the near three-hour marathon that left both sides choked up. "I guess it was fitting and exciting to play the way I did, kind of in his name."