Looking back at the non-con schedule

Share All sharing options for: Looking back at the non-con schedule 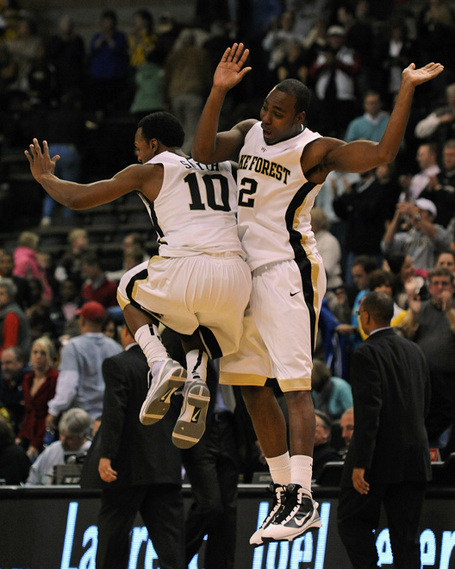 Now that we're done with the non-conference slate, I thought it would be a good idea to take a look at the wins, losses, and what those games seem to indicate for the rest of the year.

Oral Roberts: Summit League, 8-7 (3-1) KenPom: 147
I predicted that ORU would be a good win at the end of the season and I would like to stick to it. Despite their inconsistencies, Oral Roberts has shown the ability to beat some pretty good teams, and that New Mexico win was really huge (as was Missouri). The problem is some head-scratching losses, even if four of them were by a combined 18 points. This team has the chance to make it to the Summit Finals and you never know with those conference tourneys. They could exit right away or earn the autobid. Regardless, this isn't a "bad" win.

East Carolina: CUSA, 6-8 (0-0) KenPom: 188
Now this isn't exactly a stellar win right now. Of ECU's 6 wins, three are against teams not ranked at all in the Pomeroy and the other three are against South Dakota State (208), UNC-G (272) and NC Central (331). None of their losses are bad, as on average their losses have come to opponents with a KenPom rating of 65. But conference play is what separates teams. If ECU can find a way to play good ball in the heart of their schedule, the win will look better, but as it stands right now, there isn't much to indicate that the Pirates will have anything more than a subpar year.

High Point: Big South, 6-6 (2-1) KenPom: 298
They're 2-1 in the Big South and if they can rattle off some Ws in a row under their new coach, they could finish a bit higher. The problem is, their conference is not very good. At all. The best team they play from here on out is Coastal Carolina (111) and outside of them, they play 13 games against teams 250 or worse. But even with a decent record, this isn't a great win for the Deacs. Winston-Salem State: Independent, 2-8, KenPom: 345
The third worst team in the nation, WSSU isn't doing Wake any favors. Their two wins are against Atlanta Christian and Milligan. Haven't heard of them? Me either. The Rams have played a murderer's row of a schedule, with road games against Oregon, Wake, Charlotte, Maryland and GT. They move into an easier stretch, so there might be a win or two here and there, but WSSU is a blemish. I am glad we play the series as it is nice for the city, but it will be nice to see WSSU drop back down and I'd love to see us play them in exhibitions.

William & Mary CAA, 10-2 (2-0), KenPom: 68
Ah, the William & Mary game. We knew they were dangerous, but we just didn't know how good they actually were. This team has been a buzz saw since losing their first two games against UConn and Harvard (in 3OTs). Since then they have rattled off 10 straight wins, including victories over Richmond, Maryland and Hofstra. This is a pretty good basketball team, a possible tournament bid and shouldn't be a bad looking loss at the end of the season.

Purdue Big Ten , 13-0 (1-0), KenPom: 7
I want this one back. We could have beaten them. Regardless, Purdue is really effing good. Gonzaga WCC, 11-3 (0-0), KenPom: 51
Gonzaga's three losses are to us, Duke and Michigan State. They have wins over Wisconsin, Cincy, Oklahoma and Illinois. Moving into conference play, they have the chance to make it out of there with 2 or less losses (games against Portland and St. Mary's will be tough). They also have a road test at Memphis staring at them too. Good win for the Deacs that will only look better at the end of the season. Despite the Duke shellacking, Gonzaga is a pretty darned good basketball team.

UNC-W CAA, 4-8 (0-2), KenPom: 117
I don't know if I'd be that far off in saying that the Seahawks are the best 4 win team in the country. They have had a bit of bad luck and some really close calls in losses to George Washington, Miami, USF, George Mason and Richmond. I'd like to see them pull it together. They'll pull out a couple decent wins, but I really can't predict what their final record is going to be right now.

UNC-G SoCon, 2-11 (1-1), KenPom: 272
Another not-so-great win, but the Spartans have played some tough squads--Duke, Clemson, Va Tech, Wake, NC State and Maryland. They're another team I'd just like to see hang tough in conference.

Richmond A-10, 11-4 (0-0), KenPom: 52
I love how Richmond plays. They come to play every day and don't look like they fear anyone. They have Ws over Mississippi State, Missouri ODU and Florida. It's not a stretch by any means, but I'm predicting that the Spiders will be dancing.

Xavier A-10, 8-5 (0-0), KenPom: 28
X has played the 31st toughest schedule in the country up to this point and their losses are "good" if you can call any losses good (Marquette, Baylor, Wake, Kansas State, Butler). They got hosed against Butler, and I'm sure they wish they had won at least one of those five, but Xavier is always a threat to win the A-10 and they've got a great KenPom ranking right now. They just need to take care of business and win against the big teams in conference.

So if we take a look at the overall picture, Wake has three really good wins (X, Richmond, Zags), losses to a powerhouse and a good mid-major, two fairly decent wins in UNC-W and ORU, and a handful of gimme wins. They're in good shape and came through the non-con schedule with the record I was hoping they'd have. It was absolutely imperative they came away with back-to-back wins last week, and those will really help their cause if they are able to finish with a .500 record in conference.

Playing so many road games will also help them too. Wake looks like they're gelling a little bit, and with 7 straight wins, they will need that momentum as they move into an insane stretch that includes road games against Miami, Duke and UNC and a home game against Maryland. We will see what this team is made of.