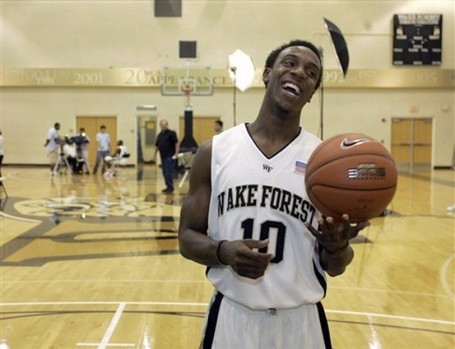 In the inaugural meeting of the Skip Prosser Classic between the Demon Deacons and the Xavier Musketeers, Wake Forest won a thriller in double overtime by a final of 96-92.

The game was a classic Skip game--run after run, big shot after big shot, tons of transition buckets and some seriously sloppy, head-scratching play. Freshman Jordan Crawford started hot but had a slow second half before putting X on his shoulders, finishing with 30 points, 6 rebounds and 4 assists.

But the real star was Ishmael Smith. Especially emotional in this game (along with L.D. Williams, whose vocal play earned him a technical, but he made a huge steal and drive late in the game), Smith was unstoppable, hitting threes, giving it up to his teammates and coming away with the basketball defensively, not to mention adding three blocks.

Ish finished with 28 points and 9 assists on the day. Right behind him was Al-Farouq Aminu. AFA got himself into trouble in the first half, picking up three early fouls, but came right back in the second half to explode--adding 26 points and 18 rebounds. His length also bothered Xavier after he was able to stay in control and avoid fouling. The duo of Aminu and Smith tossed in some huge YouTube worthy plays, all altering the flow of the game.

Freshman C.J. Harris made three huge plays of his own. At the end of the first half with the clock winding down, CJ stopped, head faked, set his feet behind the line and jumped into contact, drawing the foul and three free throws, which he calmly hit to cut the X lead down to two.

In bonus time, CJ rotated on defense as Crawford got away from Aminu on the perimeter. Harris was able to get to Crawford and alter his shot down low, forcing a miss. He also got the call right at the end of the second OT with three seconds remaining and he drained them both, sealing the W.

It's not necessary to say what this win means to the Demon Deacons. Wake finishes the non-conference slate with just two losses, and some pretty big wins. And they seem to be really finding their identity. Wake earns a week off before they'll take on Miami.