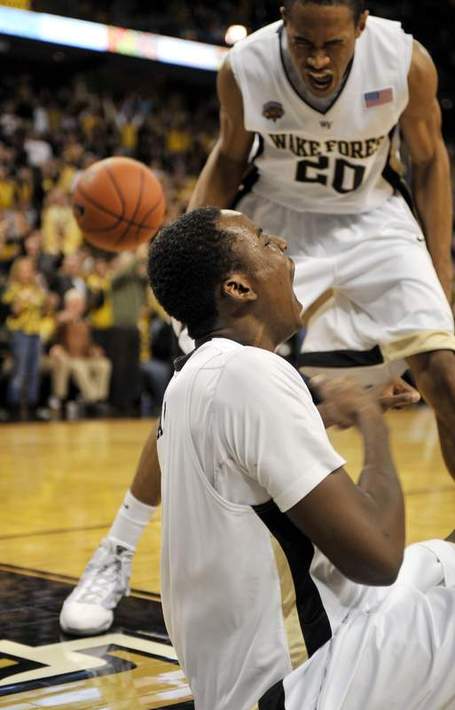 It's time for another exciting edition of coffee talk with Linda Rich...err...WakeJake and myself. Today we preview the Demon Deacons' matchup against UNC in Chapel Hill.

WakeJake: Tonight the Deacs try to bounce back as they take the floor as six point dogs to the Heels. Obviously, the status of Ed Davis is the big storyline, but I have little doubt that he will play. I expect this to be a battle on the boards again, with the team who can convert on second chance opportunities coming out with the victory.

MRickman: And second chance opportunities sure played a big part of the game against Duke, didn't it? Wake absolutely has to do a better job of crashing the boards on the defensive end. If Davis doesn't play, we might see some of Will Graves at the 4, and an increase of minutes for John Henson--both things that UNC really does not want to do.

WakeJake: I would be surprised if they put chucker Graves at the 4. I expect the Wear twins to play a bigger role tonight if Davis is limited at all, but thankfully they are much less talented around the basket than the Plumlees. Back to the second chance opportunities - the problem in the first half against Duke resulted from Wake's effort to stop Duke from beating them from the three point line. Wake switched on every screen, creating some big mismatches in the paint after missed shots.

Also, after Aminu picked up his first foul he was very tentative on defense. It is not hard to recognize that we are a better team with him on the floor, and at Duke and Carolina, fouls are certainly easy to come by. Hopefully he stays out of trouble tonight as well.

MRickman: An interesting point on the switching. I noticed that too, and we've tended to do that a lot the last couple years. Do you see that playing a role tonight, or will Wake take their chances on fighting through the screens? Regardless of who is at the 4 if Davis doesn't play, Aminu should be able to really exploit that matchup. We saw Chas McFarland go into another gear against Duke on Sunday. Ignoring the "Chas is dirty RAWR" comments, Wake will need another good game out of him.

WakeJake: I think Dino's strategy in general is to switch, but I don't expect the switches to be as aggressive tonight since, outside of Graves, Carolina is pretty bad from the three point line. Obviously, we need to see an aggressive Chas. If Carolina fans are bitching about him tomorrow morning, we know he did a good job. Who are you looking at on the offensive end of the floor to be the X-factor for the Deacs tonight?

MRickman: I was asked this question yesterday on the radio show too. And I am copping out like I did then. I think there's two key X factors. We know what we're going to get out of Aminu, and anything from the bigs is a pleasant surprise, but as far as X factors are concerned, I look towards the freshmen. We saw how dangerous Ari Stewart can be when he is set free and as long as Dino gives him a longer leash, he could have a big game.

CJ Harris has had a couple rough patches here and there, but it would be great to see him have a good shooting night. The ultimate X factor of course though is Ish Smith. He took a few too many shots last game and I felt like he took it upon himself to initiate the offense. If he can find the open shooters and do what he does best, that's a big key.

WakeJake: I'm pretty sure that Ari is unleashed, as we have seen so far this season. He has a really pretty shot and although his shot selection is pretty questionable at times, it is hard to complain about it if it goes in as often as it has so far. On the topic of CJ, he played like a scared freshman for the first time at Duke. Hopefully, he will not be as intimidated by the wine & cheese crowd at the Nose Dome. If he can knock down a couple treys or get to the free throw line from tough drives I think the Deacs have a good shot at this game.

I also don't expect Ish to struggle with his floater two games in a row. We need to get out on the break and give Ish as many opportunities as possible with Aminu running alongside him. Some of their connections are amazing because of their chemistry and Farouq's incredible hands.

MRickman: And it really seems like Farouq has listened as far as the break is concerned. He has started to limit the times he takes the ball up court by himself and that's really given the Deacs a lot more easy points, not to mention some highlight reel material for the intro video next year.

WakeJake: Speaking of entertainment (segues FTW!), I cannot wait to hear the NBA crew announcing our game tonight. It may be the happiest moment of my life if Mark Jackson says "Mama der goes dat man" when referring to Farouq or Ish. Don't forget the classic "Hand down, man down!" from Jackson or Breen's "PUTS IT IN" as well. Much better than hearing Dickie V. Van Gundy is likely to spew some ref hate as well.

MRickman: And the unheralded star of the evening: No Mike Patrick in sight! So let's get down and dirty--what are your three keys to tonight's game?

1. Don't let Graves get hot
2. Keep the Heels off the offensive glass
3. Play quick, but not in a hurry (John Wooden)

MRickman: That sounds about right. For me, we need the bigs to play bigger. I like what I've been seeing out of Tony Woods lately and hopefully he can build on that. Wake needs to minimize mistakes (goes along with the Wooden quote), but not be afraid to make those mistakes or take a shot.

WakeJake: Give us a prediction, our radio correspondent.

MRickman: Prediction? Even if Davis plays I don't think he'll be as effective as usual and they'll have to ride the Wears too much. Wake will get called for way too many fouls since physicality is going to become a "point of emphasis," but with Aminu and Ish Smith having big games, as well as the Heels' poor shooting on the perimeter, Wake will leave the Wine and Cheese crowd speechless and confused, winning 74-70. Jake?

WakeJake: I think it will be a back and forth game and be within 6 or 7 points the majority of the time. Farouq has early foul trouble that forces him to the bench for major minutes in the first half. I would like to go with my heart, but I say Carolina bounces back and wins 78-73.

MRickman: Maybe a JC Harris thrown in there?