Share All sharing options for: What Went Wrong: Wake Forest vs. Baylor 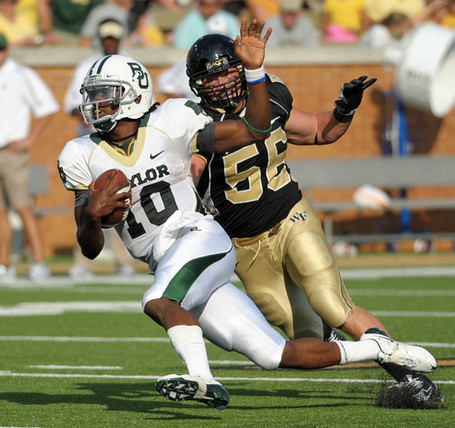 Where to start? The Baylor loss was eye-opening, but as Chip Vaughn said last year after the Maryland loss--sometimes losses like these are a "come to Jesus" moment. Did the Deacs have their come to Jesus moment early on? A young team falls into bad habits that take awhile to address at times, and if they win their first few games, those mistakes and problems get masked. At least the problems came to the forefront early. Now the question is, what went wrong vs. Baylor?

Invasion of the Riley Snatchers

I don't know if Riley Skinner had swine flu or not, but it sure looked like something was wrong. He just wasn't himself. The senior quarterback was skittish, slow in decision-making and just all around looked uncomfortable in the pocket.

If this team is going to succeed, it is absolutely imperative that Skinner lead this offense. He is one of the most accurate passers in the nation and he needs to trust his abilities. Far too often Riley had a guy open over the middle or in the flats and he either didn't see them in his progression, or he was trying to do too much by looking for the big play. He needs to go back to what has been successful for him in three years--look for the dumps and dinks for 5-15 yards and take shots downfield when they present themselves. Riley's play on Saturday is going to play a huge factor in whether or not the Deacs will beat the Cardinal.

A Bad Case of the Drops

Have you seen that commercial where Andre Johnson catches everything because of those gloves? Here's hoping Jim Grove has seen it too and went right out and bought a whole case of them after Saturday's loss. In critical times, the Williamses saw balls right on the money bounce right out of their hands. There is nothing worse for a drive than seeing a wide open route turn into a dropped pass. In one critical juncture, the ball popped right up in the air for a Baylor INT in the red zone. Even worse, in the last drive, there were two drops in a row on open looks, killing the drive and ending the Deacs' chances for a comeback. I already have one Braylon Edwards to follow, I don't need two more.

This sure looked like the Navy game didn't it? Bunches of turnovers, missed opportunities, blown coverages and head-scratching decisions crippled the Demon Deacons against Baylor. What's worse is that Wake still had a chance to win it in the final two minutes. If the Deacs had minimized the mistakes just a little bit, they probably would have won that game.

As discussed above, Riley played completely out of his head, there were fumbles and big plays for Baylor off of missed assignments or blown coverage--see first drive and double pass for a TD. To their credit, Baylor maximized those opportunities. This is not Jim Grobe football, and believe me, he will not let this happen again.

I know Wake has made its mark offensively off of trick plays and mixing up the looks, but who can get comfortable with a new formation every series and sometimes from play to play? In the first drive, the Deacs had a lot of success in a wishbone set, using Chris Givens and Y'lou, but they went away from that in favor of FB football later, then tradition I-formation, then shotgun.

Lobo tends to outthink himself--he comes up with good plays and schemes, but he has a real problem sticking with one formation or another and this has to hurt the flow of the offense. And to add insult to injury, Kevin Harris had just four carries on the day and Brandon Pendergrass and Josh Adams combined for 7 carries and 20 yards. This just is not going to get it done for a team that said they were going to smashmouth football this year.

If the Deacs go back to misdirection, pulling guards, opening holes in the middle and using end-arounds as well as getting Riley good looks in the flats, over the middle and down the sidelines, Wake will have more success. It will be interesting to see what Lobo goes with this week.

Who Will Step Up On Defense?

I'm going to leave the offensive line alone for today. They were pushed around here and there and allowed the pocket to collapse on Riley much of the day, but overall they showed a lot more than most of last year. I'm not particularly worried about the offensive line play. What I would like to focus on is the defensive side of the ball. We all knew coming in that the defense was a question mark--now how did they perform?

As expected, early on there were growing pains as evidenced by Baylor's opening drive. They also gave up far too many big plays overall. But, there were flashes including the last stand to give Wake the ball back with about a minute and a half to play in the game to give the Deacs a chance to win.

The Deacs lost more than just talent on defense last year, they lost leaders and playmakers. It was easy for the defense to know that if the team needed it, guys like AC, Phonz, Chip and KP would step up and come up huge. Players need to take on this role this year as well and not just look around for someone else to do that. Whether it is Boo, JR, Ghee, Wilber or someone else, the Deacs need leadership on the defensive side of the ball.