Elon vs. Wake Forest Preview: What To Watch For

Share All sharing options for: Elon vs. Wake Forest Preview: What To Watch For 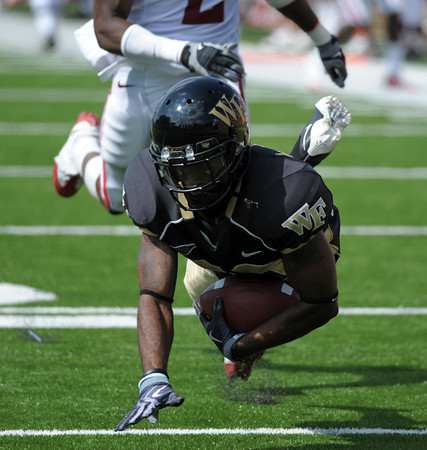 The Demon Deacons' game against Elon on Saturday poses some very interesting storylines. In their final game before ACC play, it is obvious that the Deacs will want to work on and tune up their game before facing off against BC next week. The Phoenix should be a good FCS opponent to see what Wake Forest can do. Here's what to keep an eye on in the Sept. 19 game.

This is likely the biggest storyline for the Deacs going into week three.  The loss of Wilber for six to eight weeks is a tough one, especially considering that he was Wake's best past rusher by a good margin.

It will largely be up to redshirt sophomores Gelo Orange and Will Wright to get the job done.  Orange was just moved to the defensive line this summer after playing linebacker during his first couple years on campus.  He does not possess ideal size for the position at 6'1" 225, but hopes to use his speed and quickness to get around the much bigger and stronger offensive lineman that he will face.

Wright was impressive in the summer scrimmages and will use the unfortunate injury to Wilber to prove to the coaches that he can get the job done in actual games.  His measureables are nearly identical to Wilber's and he hopes to make the same kind of impact that Kyle made during his initial reps last season.

If these guys cannot get the job done adequately, look out for the possibility of seeing a true freshman take the field.  Coach Grobe feels that Zach Thompson is the most physical of the defensive ends on the roster and could see some playing time depending on the results of the coming weeks.

It sure feels good to have the old Riley Skinner back. Skinner, who has successfully led seven fourth quarter game-winning drives, really looked to be in his element again. This was due to a combination of factors.

First, the offensive line did a much better job of protecting Riley and giving him a pocket. This allowed Skinner to find open receivers and also take more shots downfield (including the long pass to Lovell Jackson in the last two minutes).

In addition to the OL protecting Riley, the Deacs did a much better job of running the football (discussed below), which kept the defense honest and made them respect the run, again giving Skinner more opportunities to make a play.

Skinner's comfort level made him look like a completely different quarterback (and earned him ACC Offensive Player of the Week honors) than he did in the first game against Baylor when he threw three interceptions and had a 52.0 quarterback rating.

Skinner made effective three and five step passes as well as scrambled well (4 rushes for 21 yards), and his 20 yard reception was just a bonus. As has been said time and again, if Wake Forest is going to get back to their fourth straight bowl game, Skinner and the offense will have to lead the way, and the win over Stanford, especially in the second half, makes it seem like that will be a good possibility.

Bringing Back The Rushing Attack

A week after a very disheartening performance by the Wake Forest running backs (including the fact that they were being underutilized), the three-headed monster of Josh Adams, Brandon Pendergrass and Kevin Harris exploded for 140 yards on 24 attempts, good for 5.2 yards per carry.

This was really a testament to just how well the offensive line played against the Cardinal. The line was able to open up big holes in the middle, including some nice pulling guard plays off-tackle, and the running backs hit the hole hard. With the middle opening up, Wake could also run to the outside.

But it is important to highlight the receivers' contributions to the rushing attack. Chris Givens and Devon Brown combined for 98 yards on 13 attempts (7.5 ypc). Grobe's offense seems to be coming together, and hopefully the Deacs can sustain drives as they did in the second half (19:44 time of possession vs. Stanford's 10:16) by committing to the run.

The Phoenix Through The Air

The Wake secondary has a tough test ahead of them when they face Elon on Saturday. The Phoenix, whom the Demon Deacons have not played since Sept. 16, 1939 (a 34-0 victory), are currently No. 11 in the FCS coaches poll and they've earned it.

In their two wins over Presbyterian and Davidson, the Phoenix have won by a combined score of 97-7. That's not a typo. In fact, Elon's statistics are really mind-blowing-they lead the nation with 594.5 yards per game, 367.5 yards passing per game, a 187.42 passing efficiency rating, 14.4 yards per catch and 9 passing touchdowns. I'm not listing these stats just to give a laundry list, it is to really hammer home how important it is for the Deacs to stay home and play mistake-free football.

Now, Davidson and Presbyterian are hardly Florida and USC, but stats are stats. The Deacs are not going to overlook Elon as they prepare for their game in Chestnut Hill, Mass. when they face BC. This will be a good opportunity though for Wake to get their secondary some really good work, as Elon will be passing a lot and the defensive backs will get a lot of looks.

Elon may be an FCS opponent, but this should be a competitive game-and fun to watch-as scoring won't exactly be at a premium on Saturday.

If the Deacons get off to another dreadful start this Saturday, it could end up being a very stressful night for Wake fans.  In the Baylor and Stanford games, Wake deferred the coin toss and allowed both offenses to easily drive down and score on their initial possessions.  In the weekly press conference this week Coach Grobe addressed this issue and stated that he may break away from his normal habit and choose to receive the ball first due to Wake's slow defensive starts.

As we have seen in several games so far this year, the longer that the underdogs stay within striking range, the more confidence they gain.  As a result, it will be important for the Deacons to pick up where they left off in the second half of the Stanford game by running the ball effectively and owning time of possession.  If Wake can get out to a sizable early lead, it will likely break the spirits of their nearby opponents and eventually allow the coaching staff to go a little deeper into the depth chart.

As his quotes indicated at the press conference this Tuesday, Coach Grobe was none too pleased with the efforts from the kicking game last week.  He stated that the competition was indeed an open one again after some shaky field goal attempts by Shane Popham early in the season.

While it will likely be unknown who will have the duties until gameday, do not be surprised if either Cline Beam or Jimmy Newman got their chance during the game Saturday.  Beam, who already does kickoffs, has the strongest leg on the team, but has been somewhat inconsistent throughout the summer practices.

Newman, on the other hand, is likely the kicker of the future for the Deacs.  While most expected to see him red-shirted this season, he may see the field earlier than expected if he can prove to the coaching staff that he can be consistent and that he is not significantly affected by his sore hip.

Through two games, the Wake Forest defensive backs look to be coming into their own. During the Stanford game, Andrew Luck was throwing all over the Deacs in the first half, completing 15/22 passes for 183 yards and tossing two TDs to Ryan Whalen.

After a challenge from Jim Grobe to the entire team, the secondary answered the challenge. The defensive line put pressure on Luck, forcing him out of the pocket and making him uncomfortable. This allowed the DBs to play in one-on-one coverage and make plays, including Kenny Okoro's first career interception.

If the Deacs can continue to get after the opposing quarterbacks, this will get the backs in a rhythm. In addition, it appears that Brad Lambert is getting more confidence in the secondary as a whole and hopefully that will result in the corners playing closer to the receivers and taking away the cushion that has been giving teams short, easy passes in the flats and over the middle.

This may also result in more one-on-one coverage and Lambert calling more blitzes for the safeties, which should also give the Deacs more sack opportunities. The defensive backs are setting the tone for the Demon Deacons, as four of the six leading tacklers are in the secondary (Alex Frye, Brandon Ghee, Cyhl Quarles and Mike Williams).

It is obvious that Brandon Ghee is a true athlete and if he is able to refine his game even more, he has the potential to become a shutdown corner for the rest of the season.