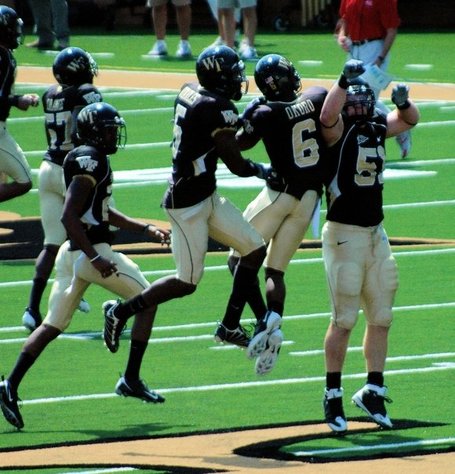 Light links today for you guys. Fits a Thursday pretty perfectly. Must-see matchup tonight between GT and Miami. Tech almost blew it last week and Miami beat FSU, so this could be a pretty good game and will set the tone in the Coastal (but not if VT has anything to do with it). So have a cup of coffee, and enjoy your morning.

Scouts' views: Beware of Curry; 49ers a dark horse - Dennis Dillon - NFL - Sporting News
2. If there's one rookie who could set the league on fire, it's Seahawks LB Aaron Curry. He plays hard, he plays fast and he plays with intensity. He's physical, and he's not intimidated by veteran players.

ACC not living up to hype, once again - Salt Lake Tribune
I've seen a lot of nicknames for the Atlantic Coast Conference; probably the one I like best is "Almost a College Conference." That about sums up what the ACC is this year in football, at least judging from the first two weeks.

The Pendulum - ‘Prepare to win:’
"This is one of those games that you can't make a whole lot of mistakes," [Elon head coach Pete] Lembo said. "You can't turn the ball over, you can't have penalties. You've got to be very fundamentally sound [against Wake Forest]."

Wake Forest 'scrambling' to replace top pass rusher - ACC - ESPN
Wake Forest was leery about playing Elon on Saturday to begin with, but facing the Phoenix will just be the beginning of about a six-week stretch without the Deacs' top pass rusher, defensive end Kyle Wilbur.

Curry in a hurry to spice up Seahawks' defense
"I understand everyone is going to want to see why I was picked fourth overall," said Curry. "Am I a bust? Is it all hype? Or am I really the real deal? My job every Sunday is not really to prove that, but to play within the team and show I'm here to contribute to the defense."

Hodges will start in front of family | floridatoday.com
"Yeah, it might be a little over-dramatic," the former Winter Springs High standout said. "But it is a cool thing. It's a cool thing to get the start and play in front of all my family and friends and everybody I've grown up with. But as far as I'm concerned, it's not going to change anything for me."

Elon icon has deep ties to Wake Forest | - Burlington Times News
So what do you do this week if you’re Dr. Alan White? "I really appreciate everything Wake Forest did for me," White said Wednesday. "But for 35 years, Elon paid me."

Orange Blossoming: Move to end gives sophomore chance to shine for Deacs
"The biggest problem with Gelo is that he played linebacker all last year. You talk about inexperience, and he's young. So being a young guy who goes from linebacker to defensive end, not only are you still a pretty young guy as far as maturity, and now you're playing a brand-new position. "We need him to play better quick." Orange said he would prefer to still be playing linebacker. He was moved to defensive end two days before August practices began. "Yeah I was kind of mad," Orange said. "But I said, ‘If I'm going to get on the field faster I have nothing to worry about.' So I didn't have to worry about it."