Stanford vs. Wake Forest Preview: What to Watch For

Share All sharing options for: Stanford vs. Wake Forest Preview: What to Watch For 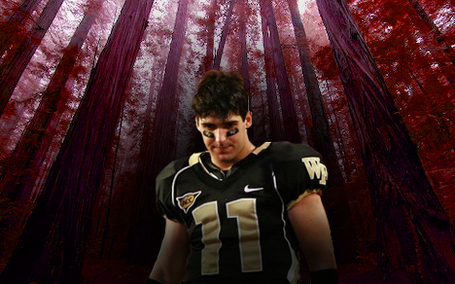 After a disappointing 2009 debut against Baylor, the Wake Forest Demon Deacons will look to get things back on track against an up-and-coming Stanford Cardinal squad Saturday at BB&T Field.  Jim Harbaugh's squad got off to a strong start last weekend against Pac-10 foe Washington State and will be out to prove that they are capable of making it to a bowl game this winter.  Click through for our top story lines to watch for as Wake and Stanford face off for the first time on the gridiron...

If you do not know the name Toby Gerhart now, you will by 3:00 on Saturday.  Gerhart is Stanford's excellent running back who racked up 121 yards and 2 touchdowns on 23 carries last week in the Cardinal's blowout of Washington State.  While Baylor beat Wake with trickery and the playmaking ability of Robert Griffin, Stanford will use more of a smashmouth approach against the inexperienced Deacon defense. Gerhart stands at 6'1" and weighs 235 lbs, so he certainly will not be avoiding contact with the guys in black.  Last season he ran for 1,276 yards and 22 touchdowns, averaging an impressive 5.7 yards per carry.

It will be up to defensive leaders Boo Robinson and John Russell to slow the ground game and make Stanford rely more on their freshman quarterback instead of the veteran in the backfield.  If Stanford gets anywhere near the 288 yard rushing total that they put up last weekend, it may be another long day for the Deacs.  One other important fact to note is that Stanford starting right tackle Matt Kopa suffered a broken foot in the first game, so replacing his production will be important for Harbaugh's ground attack.

Those who follow Wake Forest football likely knew that the drop-off from Arnoux and Curry to this year's linebacking crops would likely be quite large.  However, it did not quite hit me until the Baylor ball carriers kept breaking tackles and piling up yards after contact.  Obviously, the fact that Toby Gerhart is a far better running back than anyone on the Bear roster is likely very concerning for Coach Jim Grobe and staff.  For the Deacons to be successful, they are going to need to eliminate the amount of long, tiring drives that keep the Wake offense off the field.

The main guys for Wake who need to step up are Matt Woodlief, Hunter Haynes, Jonathon Jones and Dominique Midgett.  Last week, two of the top three tacklers were defensive backs, which is obviously never a good sign for your defense.  While this LB corps does not have a lot of game experience, they have been in the program for a while and should be ready to step into the spotlight.  Wrapping up Gerhart and company on first contact will be a key factor for the linebackers in this game and is certainly something that they were not able to do effectively last weekend.

As Coach Harbaugh explained to the media this week, West Coast teams are often "screwed" when they come to the East Coast by early kickoffs.  Saturday's game is no different, as Raycom picked up the matchup for their noon television slot.  Essentially, this is like a 9 a.m. kickoff for the Cardinal.  If you do not believe this can be a big factor, all you have to do is look to last year's matchup between Maryland and California, in which the Terps jumped out to a huge early lead and were able to withstand a late comeback to grab the important victory.  Stanford will need to come out fighting from the beginning or they may find themselves fighting back in a similar fashion.  While we're sure Harbaugh has stressed this aspect to his team, it will definitely be something to keep an eye on.

The Deacon's top two rushers last weekend were wide receivers.  In fact, no Wake running back carried the ball more than 5 times.  Obviously, this is an area of huge concern for the guys in gold and black.  The most puzzling fact behind all this is that starting running back Kevin Harris averaged 5.8 yards per carry in his four attempts and still was not able to secure more chances to earn yardage.  While the fact that Wake was down from almost the opening kickoff had an effect on the running game, it was still odd that the three running backs had such limited opportunities to get in the flow of the game.  Against Stanford, it would be nice for the Deacons to establish the run and give one of the backs a chance to earn a majority of the carries, while the other two could come in at times in the second half to give the first a breather.

While it is a good idea to give wide receivers Y'Lou Brown and Chris Givens a chance to display their playmaking abilities in different ways, itshould not be at the cost of the ground game from the actual running backs.

Luck of the Cardinal

Andrew Luck will face his first big test as a collegiate quarterback against Wake Forest.  In his first game as the leader of the Stanford offense Luck was not terribly efficient (11 of 23), but he avoided turnovers and threw for 193 yards and a touchdown. Luck has the build of an NFL quarterback at 6'4" 235 pounds, which likely results from the fact that he is the son of  former NFL quarterback Oliver Luck.  Luck also showed his versatility last weekend, as he escaped the pocket and ran for 53 yards on 6 attempts, including a 31 yard scamper.

Fortunately for Luck, he has a great running game behind him and should not have to force things in the passing game.  However, if the Deacons can slow Stanford's running game and force Luck into passing situations, the young corners and safeties may have their chance at living up to the standards of the extremely opportunistic Wake defensesof the past few years.  As is the case in most games, whichever team can avoid costly mistakes will likely go home with the victory.

After seeing three years of Riley Skinner behind center, Wake Forest fans know that last week's performance was out of character for the senior quarterback.  If the Deacons want to get back on track early in the season, he will need to return to his old habits of efficiency and ball control.

In addition to his three interceptions (two of which were his fault), Skinner looked downright uncomfortable in the pocket and exhibited a common case of the happy feet last Saturday against Baylor.  While all this is certainly not his fault (I'm talking to you, offensive line), Coach Grobe and company have high expectations of Skinner and expect him to make the right decisions to lead his team to victory.  The Deacs are certainly hopeful that their quarterback regains his excellent pocket presence, which has become a staple in Winston-Salem over the past few years.

Other things that we hope to see more of Saturday

- Corners and safeties, find the ball in the air.

- Wide receivers with the last name Williams:  Either catch the ball and hold on to it or just let it go.  No more tips and fumbles.

- Former walk-on Lee Malchow, who has finally earned his way onto the field.

- TEs involved in the passing game