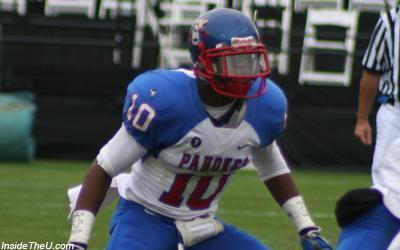 After spending the last few days in Winston-Salem with Wake Forest commit Zach Allen and his parents, Merrill Noel has decided to become the next great Pahokee cornerback for the Deacs.

This marks the end of a very interesting saga.  At the end of May, both Allen and Noel set up a press conference to announce their decisions.  Presumably, both were going to commit to Wake, but as the date approached they canceled the presser.  A few weeks later, Allen followed through with his verbal to the Deacons, while Noel eventually chose Florida State.  However, just over a month after his pledge to the 'Noles, Noel decided to visit Wake again with Allen and ultimately decided to follow his heart and join his Pahokee teammate in donning the black and gold.

Noel is a 5'10", 180 pound playmaker at the cornerback position (sound familiar?).  Just taking a glance at his offer sheet reveals that things have changed at Wake Forest.  Merrill had offers from the likes of Florida, Florida State, Georgia, Michigan, Tennessee, Auburn and West Virginia, among others.  At Wake he will team up with another stud cornerback, A.J. Marshall, and will look to build a very formidable secondary for the Demon Deacs.

Here is his ESPN profile, which contains a write-up of his strengths and weaknesses, as well as his Scout and Rivals profile.