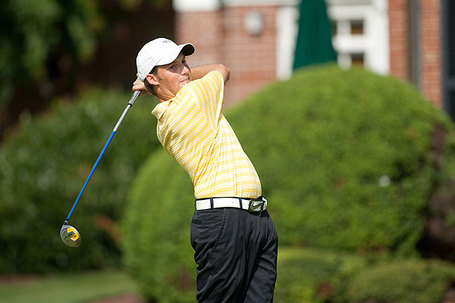 We've got some good links today--info on football recruits, the Wadkins brothers, a soccer video, and a recap of the King City Classic/LBJ Skills Academy, so click through the jump to see...

Detail - Neighbor Newspapers
Standing 5 feet, 9 inches, and weighing 180 pounds, DeShields is a game-breaking back “who’s the kind of kid that once he touches the ball, there’s really no telling what he could do,” Miller said. “Delino is one of those players that comes around maybe once or twice in a coach’s career,” Miller added. “He’s just one those guys that can make a coach look really good.” DeShields is the son of former Major League Baseball player Delino DeShields Sr., who played 13 years of professional baseball. He plans on playing baseball in college as well as football, though he has a chance at being drafted in the June 2010 MLB Amateur Draft. The younger DeShields has several scholarship offers to play football, most notably from Georgia Tech, Mississippi and Wake Forest.

Wadkins brothers want to make '09 even more special | HamptonRoads.com | PilotOnline.com
Lanny Wadkins has left an indelible mark on golf. His swash-buckling personality, cocky gait and fire-at-the-pins approach broke the game's cookie-cutter mold. He was the PGA Tour's Rookie of the Year in 1972, won the PGA Championship in 1977, was the PGA Tour's Player of the Year in 1985 and this spring was elected to the World Golf Hall of Fame. Tough act to follow? Not really, according to Travis and Tucker Wadkins.

Rivals.com Basketball Recruiting - King City Classic
J.T. Terrell drained three-pointer after three-pointer on Wednesday. Wired with the ultimate scorers mentality, Terrell doesn't let a previous miss or defensive pressure thwart his desire to score. This mentality works well for him when he is on a roll and/or his team is on the ropes. The Wake Forest coaches will need to work with him on shot selection, but they have to be awful happy they will have a scorer who presents them that challenge.

LeBron James Skills Academy – Day 3 Evening Session | NBADraft.net
* Following his impressive performance Monday evening, Al-Farouq Aminu (6’8” F/Wake Forest) showed again why he is one of the top forwards on many draft boards. His size and skill set make him well-suited for an NBA small forward. Aminu used his athleticism and 7’0” wingspan to block two shots during the session. He once again showcased his ability to get to the rim as he finished with several dunks in the half court and in transition.