Share All sharing options for: Wake Forest off-season finally at an end? 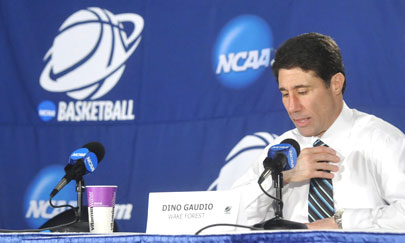 The off-season has been a tumultuous one for the Wake Forest men's basketball team. After the first round loss to Cleveland State, Head Coach Dino Gaudio blamed himself in the postgame press conference and he seemed to take those comments seriously.

After the game, he said:

What we’re not doing a good job of, and that’s on me, that’s my fault, is we want to play fast," We want to push the ball. But we’ve got to have recognition of when we don’t have the break, then understanding what we have, and if it’s not there, pulling it out and running a good half-court offense.

Since then, there have been a number of moves that have shaken up the Wake Forest basketball team. Pat Kelsey departed to take a position at Xavier. Mike Muse was moved to Director of Basketball Operations along with Walt Corbean. Gaudio hired former Demon Deacon and Forsyth Country Day Head Coach Rusty LaRue as well as former Tulsa assistant Dave Wojcik.

Needless to say, these moves show a commitment to changing the status quo...

Gaudio has had a tough time thus far removing the "former Skip Prosser" assistant tag. He has received criticism for not having success at the head coaching level in the past, but his first two years at the university, he was playing with Skip's players and Skip's coaches. It is only natural that Gaudio would want to feel comfortable as a Head Coach and attempt to create a system with his players and his coaches.

The loss of Kelsey was a tough one to stomach when it first happened. Kelsey is a terrific recruiter and is on the fast track to becoming a head coach and he was a key part of the Wake Forest family. Of course, everyone wishes him the best, but he had his name attached to a number of different jobs starting in March and I got the feeling he was headed somewhere.

This left Dino with his first big move--the hiring of former Wake Forest player Rusty LaRue. LaRue was a terrific shooter and a three-sport athlete at Wake and has always stayed close to the program. Rusty's named was attached to rumors of coming to the Wake Forest staff for a few months prior and the move makes sense, as long as he is committed to recruiting. There is little doubt he will be able to teach shooting mechanics to the players.

The next move was hiring Dave Wojcik from Tulsa to assistant head coach. This meant asking Mike Muse to move over to Director of Basketball Operations along with Corbean. Wojcik played for Gaudio in high school and coached with him at Loyola as well as at Xavier with Skip Prosser.

This obviously impacted Coach Muse, who had been responsible for working with the big men and rebounding. Muse always had his hands in recruiting as well--2011 recruit Quincy Miller mentioned Muse in our interview with him at the Carolina Challenge. His resignation is probably complex with a number of factors. It is between him and the coaching staff as to why he ultimately made that move, but whether he didn't get along with or disagreed with Gaudio, or felt slighted by being moved from assistant coach to HBO, or otherwise, the move makes sense.

Now it is on Gaudio to prove that his guys can be successful. Last year's team collapsed and stalled in half court sets. There were plenty of issues behind the scenes that have not been revealed publicly. Gaudio now has to show that he can improve offensively, keep the team together and continue to bring in quality recruits with his staff. The 2009 class, C.J. Harris and Ari Stewart, is the first one that are explicitly "his" recruits. The 2010 class looks to be a good one as well with Melvin Tabb, J.T. Terrell, Travis McKie and Tony Chennault.

It is fair to give Dino a little time to institute his system. We will see if it works as well as Jim Grobe's football philosophy, but that assessment takes a few years to evaluate. Athletic Director Ron Wellman has repetitively shown that he gives coaches time to set their programs in motion and there will be no doubt a lot of pressure on Gaudio to succeed and show improvement this season. And it will be a test, as although the team returns a load of talented players and good freshmen, it cannot be ignored that the Demon Deacons lost two first round NBA draft picks in Teague and Johnson.

Good luck to Coach Muse. He was well-liked and a true blooded Demon Deacon.