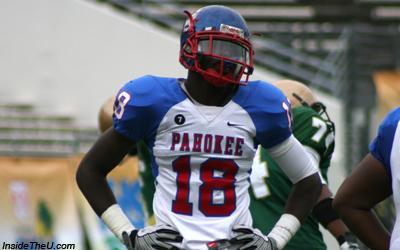 LB Zach Allen from Pahokee, FL has committed to Wake Forest, according to Rivals. Allen is a three star recruit on both Rivals and Scout and had an impressive offer sheet, including West Virginia, Louisville, Miami, Michigan, Purdue and Tennessee. Scout ranks him as the 41st best player at his position and Rivals as the 25th best OLB.

Demon Deacon fans may recognize Pahokee as the same place that 2nd round NFL pick Alphonso Smith was from. Allen will be a great cornerstone to a 2010 class that started with QB Tanner Price, S Desmond Cooper, RB Nick Knott and DT Duke Mosby.

Allen is 6'2" and 185 pounds and runs a 4.67 40 yard dash. A versatile player, Allen played both TE and linebacker last season, finishing with two TDs and 10 sacks.

Hopefully this commit will lead to more as the recruiting season heats up. Noel Allen, another Pahokee player, was recruited hard by Wake but has given a soft verbal to Florida State.