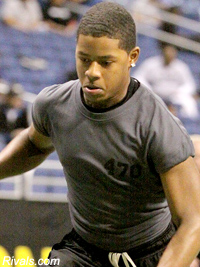 This is a big time commit for the Deacs. I mean, just look at that offer list. Marshall had 75 tackles last season, with 30 pass breakups and four interceptions and was a first-team all conference selection. He was also the team's backup QB and ran the wildcat formation. Marshall is a terrific student--with a 3.8 GPA--and has always maintained that he was looking to stay in-state. He's a three-star recruit according to Scout, but this is right in Coach Grobe's wheelhouse.

ESPN has this to say about Marshall:

Overall, Marshall may lack some size to match up versus today's bigger college receivers in press-man and his top-end speed could be tested vertically, but he has legit cover corner quicks, hips and just a knack for making plays around the football. Would excel as an underneath zone corner as well as an off-man guy. Good prospect who should excel on special teams as well.

I hate making comparisons, especially this early, but that description sounds a bit like a former Demon Deacon.