Share All sharing options for: Deacon Dump 7/17: Woods, Aminu predicted to have stellar seasons, Chris Paul could be traded? 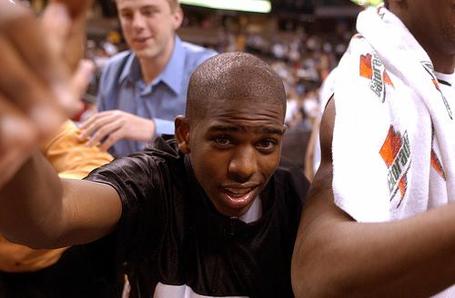 Great job of recapping the summer league yesterday by WakeJake. If you haven't read it, do so. The big news today is that Chris Paul said that he wouldn't be surprised if he was traded. You've got to believe every team in the league would give up the farm for him--he's just as valuable a chip as Lebron, Wade or Bosh and would come a year earlier than the 2010 sweepstakes, plus he's under contract. Onto the links...

Pre-Season All American Teams | Flagrant Fouls
SF- Al-Farouq Aminu, Wake Forest: Here’s a kid coming off a sensational freshman campaign. He’s an athletic anomaly who plays with great length and a high motor. If he can polish up his jumper and learn to play without the ball, this kid could explode. He has every tangible asset needed to be great, now it’s just a matter of putting his nose to the ground and getting it done.

A sneak peak Hawks mini-camp roster | Hawks Blog
While most of the rookie/free agent attention is focused on the happenings in Las Vegas, the Hawks don’t have a summer league entry in Sin City. Therefore, the only chance we’ll get to see rookie point guard Jeff Teague in action this summer is during the Hawks’ mini-camp next week at Philips Arena (it’s not open to the public, sorry, and is barely open to the media - we get to see the last half hour of action everyday, which usually consists of cats shooting free throws and trying half court trick shots).

PBN | Reach for amnesty?
"In this league, anything can happen," said Paul, at the summer league to watch his Hornets. "I can be dealt." Paul then was asked that surely he can't be serious he could be traded. "It's possible," he said. "It's possible."

Scout.com: Breaking Down Florida: The S's
10. Desmond Cooper: The Wake Forest commit is the ballhawk for State Champion Bolles. He has great length coupled with solid speed. Smart player who understands how to bait QB's into mistakes. He will need to add some weight, but no one does it better right now than the Demon Deacons.

Rivals.com College Basketball - Notebook: Big men to watch off the bench
Tony Woods, Soph., Wake Forest: Woods, a 6-11 center, was the No. 20 prospect in the 2008 recruiting class, but he didn't deliver the immediate impact that some people expected from him. Woods averaged 3.2 points, 2.6 rebounds and 10.9 minutes as a freshman. The Demon Deacons are expecting much more production from Woods now that he has a better idea of what to expect. Woods could team with Chas McFarland and Al-Farouq Aminu to give Wake Forest an exceptional frontcourt.

Ranking the ACC units: Running backs - ACC - ESPN
4. Wake Forest -- Wake has three capable tailbacks in Josh Adams, Brandon Pendergrass and Kevin Harris, who each had a 100-yard game last year and started at least one game. They'll have an improved offensive line blocking for them this year.