Share All sharing options for: Deacon Dump 7/16: Coach Grobe gets some respect 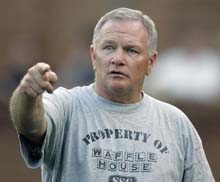 I'm starting to get really excited about football season. Previews are coming out and predictions are being made. Before we know it, it'll be August and practices will be picking up. The Deacs continue their recruiting to fill out their 2010 class and are looking at Griffin McKenzie from Moeller H.S. in Cincinnati. Links after the jump...

Ranking the coaches - Dooley’s desk - Gator Sports - Gainesville, FL - Archive
8. Jim Grobe: The Wake Forest coach could take your team and beat his and vice versa. And yours are usually better than his.

Southern Pigskin - Top Week One Games
8. Baylor at Wake Forest – Expect fireworks. Senior Riley Skinner is the most accomplished quarterback in the ACC and sophomore Robert Griffin is one of the most dynamic signals callers in the nation for the Bears. Ten years ago this game wouldn’t have even been televised. With Wake Forest now a national name and Baylor on the rise, this meeting has a lot of potential.

The five coaches I hated omitting, and Benedict Arnold is one | Mark Bradley
11. Jim Grobe, Wake Forest: Look, the guy won an ACC championship at Wake Forest, which to me is bigger than Steve Spurrier winning one at Duke when Florida State hadn’t yet joined the league. And Grobe had to outcoach the mastermind Chan Gailey to do it.

Bulls' James Johnson Admits to Being Distracted at Wake Forest -- NBA FanHouse
"We were great man," Johnson said of his Wake Forest team. "Fame just took us all by storm. We were a young team, no seasoning. But what happened is we crumbled. We were a great team and then we crumbled. Cleveland State played a great basketball game and deserved that win."

Scout.com: Breaking Down Florida: The OLB's
3. Zachary Allen: The Wake Forest commit oozes potential with great athleticism and versatility. He plays both ways and like most Muck kids is very competitive. High motor. He needs to add some weight and get more comfortable in space. Allen has a high ceiling 2-3 years down the road.

IndyStar.com | Recruiting Central | The Indianapolis Star
Wake Forest coach Dino Gaudio, Ohio State coach Thad Matta and Xavier coach Chris Mack were among those in attendance for the 17-and-under Eric Gordon All-Stars' 82-58 win over the Shining Stars. They were there to watch Griffin McKenzie, a 6-9 forward whose recruitment has really exploded recently.

He said Cincinnati, Northwestern, Tennessee, Providence, Wake Forest and Xavier are among those to offer. McKenzie's college decision is probably coming in the next month or so. "I'll probably see what options I have after the July evaluation period and go from there," he said.

Bulls' James Johnson Admits to Being Distracted at Wake Forest -- NBA FanHouse
"We were great man," Johnson said of his Wake Forest team. "Fame just took us all by storm. We were a young team, no seasoning. But what happened is we crumbled. We were a great team and then we crumbled. Cleveland State played a great basketball game and deserved that win."

HoopsHype - Articles - Jennings a true playmaker
DUDS: James Johnson was flat-out awful for Chicago today. He somehow managed 14 points despite shooting only 4-for-15 from the field, but the more disconcerting facet of his game was overconfidence and really lazy fundamentals. Lots of one-hand passes that got picked off, silly turnovers, and even a fast break where he dribbled, picked the ball up with one hand, and tried to soar for a dunk but lost control of the ball. He’s going to have to take smarter shots, work within the offense to actually get those shots, and try not to forget all those drills players get taught from age 6 at the YMCA. Two-hand passes. Take it up strong. Make smart decisions. And so on.