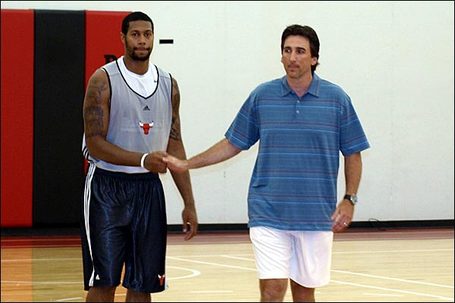 Here are today's links...there is a lot on James Johnson's first game in the summer league and he received a lot of praise. Al-Farouq Aminu explained why he stayed in school to Jeff Goodman and there is a great interview with Jeff Teague in Slam Magazine. Links after the jump...

Aminu's all about improving in second go-round - FOX Sports on MSN
"Last year I was a young rookie," Aminu said. "I played my part. This year I know I have to play more of a role and become a leader of the team. I can't just take 20 shots -- and I'm not going to do that. I'm going to make my teammates better."

OK, here's MY list of the top 10 coaches (includes Richt!) | Mark Bradley
9. Paul Johnson, Georgia Tech: Does what he does and does it wherever he goes. He and Jim Grobe of Wake Forest are the best pure coaches in the land.

The College Baseball Blog " Wake Forest and East Carolina name new Assistant Coaches
Wake Forest new head coach Tom Walter has announced that he has hired Bill Cilento as an assistant coach. He comes over from Brown University where he spent the

Bulls vs Warriors (Summer League Game 1) thoughts - Chicago Bulls Confidential
On offense he was knocking down his jumpers, finishing at the basket, leading the break, and made great passes all night. All in all, about the only negatives I could say about his game offensively is that he seemed to struggle to get involved off the ball, and that he looked pretty awkward in the post during the one post up attempt I saw.

Despite MMA background and black belt, Bulls' Johnson now focused solely on hoops - Las Vegas Sun
"He can fight up top, he can choke you out, he can do it all," said Johnson, who tallied 21 points and 8 rebounds in Chicago's 95-83 loss to Golden State. "That's kinda like my basketball game."

Chuck Swirsky Blog - Impressive debut - ESPN Chicago
James Johnson was terrific in the open court. Solid passer with great ball skills. Soft touch from outside . Again, this is SUMMER LEAGUE. Let's keep things in perspective, but for the 16th pick in the draft I was impressed with his poise.

SLAM ONLINE | " Reebok All-American Camp Recap
Tony Chennault, 6-2 point guard, Neumann Goretti (PA), Class of 2010: A hometown kid, Chennault showed his agility and quick ball-handling skills. He did a good job distributing the ball and finding the open man. Seemed to have little trouble in driving to the basket or even creating a shot for himself. The combo guard will be a nice addition to the Wake Forest roster.