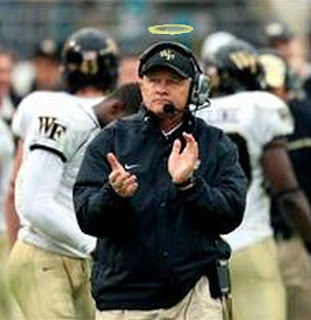 Jim Grobe and the Demon Deacons earned another verbal commitment Monday morning from Brandon Terry, a 6'5" wide receiver from Alpharetta, Georgia.  Not only does Terry possess great size for the position, but he is also fast, posting just over a 4.4 40 time at the Wake Forest one-day camp this past Sunday.  Obviously, the Wake coaching staff was impressed with Terry at the camp, as they offered him a scholarship after seeing his performance.

Luckily, Terry had a strong affinity for Wake as well.  He claimed offers from a number of BCS schools, including Wisconsin, Purdue, UConn and Mississippi State as well as interest from Georgia, Florida and Tennessee, but chose the Deacs shortly after being offered.

Scout has some free video of Terry in action

Welcome to Wake, Brandon!  It will be great to finally have a big receiver and a few more fade routes in the playbook.