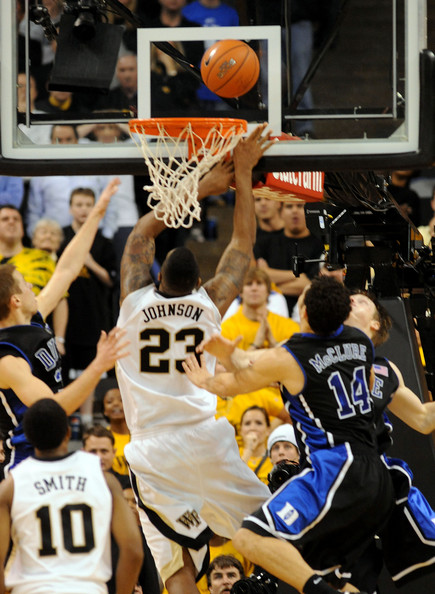 As promised, we've complied a top ten basketball moments in our four years at Wake Forest. Although the team only made one NCAA Tournament (and I'd love to forget that game), there were still some pretty spectacular plays and games over the last few years. As always, feel free to post your favorite moments in the comments or if you disagree, let me know.

10.) Wisconsin, 2005. This game was memorable for a couple of reasons. It was the first big-time game I attended at Wake. One of the ESPN Big Ten/ACC Challenge games, Wisconsin came in ranked and it is always good to see Bo Ryan's club in person. Wisconsin kept it close behind a great performance from Alando Tucker, but Justin Gray scored 37 in route to a 91-88 win. Just a great game and a fun time in the Screaming Demons student section.

9.) BYU, 2009. Just a straight up shootout, this game moved the Deacs to 13-0 and showed that, at the time, they were in the upper echelon of college basketball. A real heavyweight bout, BYU kept punching and Wake kept absorbing and punching back. Despite the game being on a network I didn't get at home, I found the game and really enjoyed watching it at the bar.

8.) Virginia, 2007. There wasn't a whole lot of wonderful wins in the 06-07 season. A true definition of a rebuilding year, Kyle Visser led a pack of youngsters with 17 points to give the Deacs just their 14th win of the season over the 25th ranked Cavaliers. This was a real feel-good win and led to a court storming, something that happens a few times on this list...

7&6.) Miami, 2008; Virginia Tech 2006. Two words: Ish Smith. The kid showed his testicular fortitude with a pair of game-winners from the exact same spot on the floor. I think I may have pulled my back jumping up the VT shot on what was a terrible day in New York after I drove to JFK and found out my flight was cancelled and had to drive back--but I'll never forget that shot. It's funny how on great sports moments a person can remember where they were and what they were doing perfectly.

5.) Maryland, 2009. This win sure felt good. Going into College Park and beating the Terps in a two point thriller. Who can forget how ridiculous Dave Neal's senior night 19 points were, and do I really have to mention this?:

4.) Duke, 2008. Suck it Duke. This game just felt good. Duke came in ranked number two in the country and got whooped by a possessed Wake team that entered the bubble discussion before collapsing at the end of the season. But that doesn't take away from this win, which saw a real emergence from freshman James Johnson, who put up 24 points and 16 rebounds. Jeff Teague added 26 of his own.

2.) UNC, 2009. In a season filled with great wins, this one felt the best. Nothing can compare to the feeling of beating the Tar Heels. That's what is so sad about the end of this year; this team really showed they could beat anybody and on this night, they beat the future NCAA Champions. Why not show one more video?

1.) GT, 2006. The most exciting game in my four years, hands down. Harvey Hale was a man possessed. I got in a little trouble during this game, as I was supposed to watch a movie with the girlfriend and kept pushing it back. "Well, it's overtime..." "Well, you're not going to believe this, but it's double overtime..." But it was worth it. These are the moments you live for as a college basketball fan.

WakeJake here, checking in with my own top ten:

10)  Clemson, 2009 - After beating BC and UNC, many people expected the Deacs to be out of gas when they traveled to LittleJohn to face the Tigers.  However, Wake Forest put on a show and played one of their best games of the season.  Al-Farouq Aminu and James Johnson had several nasty dunks and Wake seemed to be on top of the world.  This is a good place to stop the story.

9) Virginia, 2007 - It always feels good to send the seniors out on a high note.  In this case Kyle Visser led the Deacs to a big upset victory over the Wahoos.  Virginia would have been the top seed in the ACC tourney and regular season champs with a win, but LD Williams locked down both Sean Singletary and JR Reynolds at times and lifted the Deacs to a nice win.

8) Wisconsin, 2005 - Refer to what Rickman said above.  My first big-game experience at Wake.  I was immediately hooked and will be for the rest of my life.

7) NSCU/FSU, 2006 - After a terribly frustrating season, getting to Semifinal Saturday in the ACC Tournament as a 12 seed was fulfilling.  I will never forget Justin Gray pulling his jersey over to reveal his heart after making some big shots.  We gave Duke a scare as well, but ran out of gas in the second half.

6 & 5) VT and Miami -  Ish.  My favorite Wake player of all time delivers.  On a fun note, after the shot against VT I got taken out by a LJVM security guard.  Good times.  The banked three by Gary Clark and the bad decisions by AD Vassallo to get us there were pretty miraculous as well.

4) Duke, 2009 - The hype leading up to this game was phenomenal.  ESPN even played the entire pre-game ritual on national TV, including the Screamin' Demons swaying, the video, and the players' circle.  I still get chills watching it every time.  Although James' last second shot is easily the most memorable moment here (wonderfully drawn up, DIno) Ish's between the legs drop off for Aminu was just ridiculous.  The Joel was rockin' that night too and was one of my favorite atmospheres as a student.

3) GT, 2006 - So many back and forth shots in this late-night ACC Tourney game.  Every time Harvey Hale, Mike Drum, or Ish Smith made a big bucket, Anthony Morrow or Thad Young answered back.  This game was really hard on my nerves, but seeing Harvey deliver in double OT after a tough year was special.

2) Duke, 2008 - I picked this one over the game from this past season because I really enjoy winning as an underdog.  This game put Wake back in the national discussion and gave fans an idea of how good the team could be over the next year and a half.

1)  UNC, 2009 - Not surprising coming from me, but after hearing all the smack talk throughout the summer, fall and part of the winter it felt great to see my Deacs take care of the Heels.  Ty Lawson was completely dominated the entire game by Al-Farouq Aminu and Teague.  The one moment from this game that sticks out in my head the most is Chas McFarland's half court dash to a fast break layup in the second half.  It never seemed like he was going to make it there, but the big fella collected the long rebound and layed it in "gracefully."

I'll leave you with one of my favorite individual moments as well: