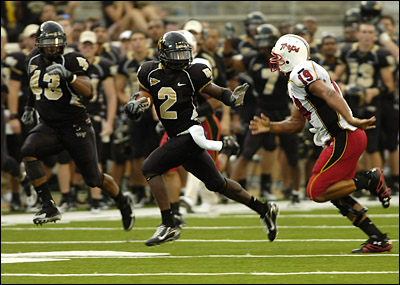 Now that we've gone and graduated, WakeJake and I thought it'd be a good idea to run through our favorite moments in our four years. There are other memorable moments--winning Regionals in golf, the tennis Doubles Championship, the NCAA Championship in soccer--but we're going to focus on football and basketball. Expect the basketball installment soon, but for now, here are the top 10 moments in the last four years in Demon Deacon football.

10.) NC State, 2006: In the middle of a storybook season, the Deacs went into Raleigh and beat the Wolfpack. What was special about this game was just how they did it. Kicker Sam Swank boomed three field goals of over 50 yards and Nate Morton had a TD catch of 57 yards, but the biggest play of the day came when Josh Gattis picked off Daniel Evans with under a minute to play.

I've always thought the biggest moments for a sports team come when you can remember exactly where you were when they happened and I remember thinking during this game that this season was really a special one. That's why this game is on my list.

9.) Duke, 2008: This was not a good game for the Deacs. They played poorly against an undermatched Duke squad and the Blue Devils forced an overtime. Giving up 30 points, this was also one of the worse days for the vaunted Demon Deacon defense. But what made this a special moment was from a player who made big plays time and again for Wake Forest: Alphonso Smith. With Duke driving, Smith made an incredible interception in the endzone, sealing the win for the Deacs. Boy am I going to miss #2.

8.) Clemson, 2008: There is no team I want Wake to beat every year more than Clemson. We did that my freshman year, stunning Clemson at the end. That was one spectacular win, but I think the win in 2008 was more important. Clemson really struggled to start last season and they came into BB&T Field needing a win. In a Thursday night game with a ton of NFL scouts present, the Deacs' defense behind Alphonso Smith and Aaron Curry shut down Clemson, allowing just seven points. If I could make a list of the top 10 least favorite moments, the 2007 game in Death Valley would be on that list, so revenge was definitely sweet.

7.) Ole Miss, 2008: Little did we know at the time just how good Ole Miss really was. The future Cotton Bowl champs came into Winston-Salem with new quarterback Jevan Sneed at the helm and he really came through, throwing a TD with just over a minute to play to put the Rebels up one. But as he's done time and again in his career, Riley Skinner made great plays to get the Deacs within field goal distance and Sam Swank put Wake up for good with a 41 yarder.

6.) Maryland, 2006: After a BC loss to Miami on a Thursday, the Deacs were playing Maryland for the Atlantic title. Wake Forest, playing for a berth in the ACC Championship. I remember just being in awe as the game started--it was Thanksgiving weekend and I was glued to my couch. The whole game had this electric feel to it and in College Park, the Deacs came out with a purpose, landing punch after punch in route to a 38-24 win.

5.) Maryland, 2007: An even bigger win in terms of theatrics came in Winston-Salem the next season. The Deacs, behind the whole game, made an incredible fourth quarter comeback. John Tereshinski had a TD with three seconds to play to send the game to OT, but the play of the game came on Alphonso's 100 yard interception return in the third quarter to start the rally. Like I said before, Smith was one of the greats to ever suit up in a Demon Deacon uniform, and this game just showed his playmaking ability.

4.) BC, 2006: In a season of firsts for the Demon Deacons, one of the biggest wins of the year came against the Matt Ryan-led Eagles. Kevin Marion had an 81 yard TD run and both Josh Gattis and Patrick Ghee had interceptions to beat #16 BC. This sent the Deacs to 8-1 and as Coach Grobe said, it was really time to dream a little bit.

3.) Florida State, 2006: Just how special was the 2006 season? Well how about a 30-0 drubbing of the Seminoles? I don't even need to say anything else. 30-0 against Florida State who had historically beat down the Deacs. What a win.

2.) Meineke Car Care Bowl vs. UConn, 2007: This is on here for two reasons. I got to sit in the press box in Charlotte to cover a bowl game, which was a first for me. Secondly, the Deacs won a bowl game, which was also a first for me. Kenny Moore was named MVP after a spectacular game, capping off a season in which he set an ACC record with 98 catches.

1.) ACC Championship vs Georgia Tech, 2006: Why say anything more than I have to? The Deacs won their first ever ACC Championship against Calvin Johnson and the Yellow Jackets in Jacksonville, capping off the best season in Wake Forest history. I'll never forget that.

WakeJake here, checking in with my top ten:

10.) Clemson, 2005 - We did not make a bowl game during my freshman year, but beating Clemson at home is my first fond sports memory as a student.  Cory Randolph replaced Ben Mauk and accounted for four touchdowns, including the game winning pass to Kevin Marion with 33 seconds left.  ACC POY Chris Barclay also had over 100 yards in this upset victory, which was a sign of things to come.

9.)  North Carolina, 2006 - Just another barn-burner in the 2006 season.  In my first trip to Chapel Hill, it looked like UNC was going to jog up the field to win the game in the final moments.  After blocking a punt for a touchdown earlier in the game, Alphonso Smith got beat in coverage in the final minute, but managed to catch up with the UNC receiver and knock him out of bounds inside the ten yard line.  After stopping a couple runs, Jon Abbate put his cape on and saved the day as he intercepted a pass in the final seconds and preserved victory for the Deacs.

8.)  Clemson, 2008 - Bye, bye Tammy.  After much preseason hype, Clemson's meltdown happened early and often.  On an ESPN Thursday night game, the Deacs added to the Tiger's misery and sent Coach Bowden a pink slip.  After crushing my heart in 2006 and 2007, it was fun to send their orange overall-wearing fans home unhappy.

7.)  FSU, 2008 - In my first trip to Tallahassee, the nation was talking up the Noles after their nice start to the season.  All the FSU forums were praising Christian Ponder as their new savior and there was no way the Deacs were going to conquer them for a third straight time.  While the offense was pretty pathetic both ways that day, Ponder racked up 52 yards on 6/18 passing and threw 3 interceptions.  FSU completed 17 passes that day, but 5 of them were to the Wake Forest defense.  The tailgating was good too.

6.) North Carolina, 2007 - If you know me, you know I enjoy beating Carolina more than anything in the world.  This 37-10 stomping was very satisfying, as was watching AC jog into the endzone against his brother's alma mater, who did not bother to offer him a scholarship.

4.) Maryland, 2006 - In terms of quality of play, this is probably the best game I have seen the Deacs play on offense.  With an ACC Championship Game berth on the line, freshman Riley Skinner and wide receiver-turned-running back Kenny Moore kept pouring on the points in this back and forth game.  Skinner's blocks on the counter runs by Moore were a lot of fun to watch.

3.) Maryland, 2007 - The stadium was half empty and the game was pretty much over - until the Phonz took over.  The feeling of sitting with the few remaining diehard fans in the student section and witnessing this incredible comeback was exhilarating.  Jeremy Thompson's sack on the final play in OT  was the biggest owning of an offensive lineman that I have ever seen.

2.) BC, 2006 - The atmosphere that night in Groves stadium was amazing.  In a huge night game on national television, Kevin Marion's 81 yard run up the sideline gave Wake the edge and Patrick Ghee intercepted the final pass to cap it off.  I will never forget Stan Cotten's call of the run by Marion.  My one and only field rushing at Wake puts this one at #2.

1.) ACC Championship - The emotions and excitement I experienced when Willie Idlette clinched the game on his first down run have yet to be matched.  This ugly 9-6 win has several moments I will never forget - Willie's run, catch and block along with a ridiculous interception by Riley Swanson and one from AC as well.