The TOC is one of the largest AAU tournaments of the spring and features teams from around the country.  Saturday at the Dean Smith Center on the campus of the University of North Carolina, three games took place simultaneously throughout the day.  While it is difficult to keep an eye on all the action, I was able to watch several Wake Forest prospects in action as well as a sizable amount of other big names that will be very familiar in a couple years...

Tyler Lewis (PG Carolina Flight) - Every time I watch him play, I come away impressed.  Playing up in the 16U division, Lewis was the floor general for the Flight, taking care of the basketball and scoring in a variety of ways.  He has perfected the runner in the lane and rarely makes mistakes when being pressured by the defense.  While his quickness is still a work in process, his savvy on the court gets him by at this level.  The only complaint that I had during this morning's game concerning Lewis was that he did not give the ball up on the break like I expected.  Since he usually managed to score anyway there is little room to complain, but feeding teammates effectively in transition is something I like to see in a point guard.  Lewis has a number of high major schools looking at him and I do not see that ending anytime soon.

Jackson Simmons (6'7" PF Carolina Flight) - We saw Simmons play at the Carolina Challenge, but today he played much more like a potential high major player.  He certainly has a nose for the ball and always seems to be in the right place at the right time.  Jackson's hustle and soft hands around the basket payed off to the tune of 18 points in the blowout victory over the squad from Richmond.  His broad shoulders and long arms leads one to believe that he may add significant height and weight before he enters college.  In fact, his father stands at 6'9" and played for Western Carolina so it seems likely that he is far from finished.  Simmons is certainly a player to keep an eye on, considering his work ethic, finishing skills and physical attributes.

Marquis Rankin (6'0" PG Team United) - Since his stellar performance at Telep's Carolina Challenge, Rankin has been getting a lot of attention from the big name schools in the area.  Duke and UNC recently joined Wake Forest in the recruitment of Rankin, making it especially interesting.  Saturday, however, was not his finest day.  Going up against the fundamentally sound Indiana Elite, Rankin's Team United was over-matched from the opening tip.  While the skill and quickness are obviously present, Rankin was not able to get into the lane and finish against Marshall Plumlee and Cody Zeller of the Elite.  Rankin finished with 12 points and a couple assists in the 65-33 shellacking.

P.J. Hairston (6'5" G CP3 All-Stars) - P.J. was easily the best 2011 prospect that I witnessed on Saturday.  This was my first time seeing him in action and he pretty much does it all.  I had heard about his deep range (which was true) but I had no idea that he possessed such great athleticism and desire as well.  On a team full of rising seniors, Hairston is the one that seems to get after it the most.  He finished with 17 points in a win over Team Philly in the afternoon session on a variety of shots and drives to the hoop.  While many think he will be a Heel sooner rather than later, Florida, Georgetown and Wake are among the other contenders for his services.

Marshall Plumlee (6'11" Indiana Elite) - The youngest Plumlee is still a work in progress, but it'll all come together soon.  He is a great communicator on the floor and fundamentally sound in nearly all aspects of the game.  His offensive game is a bit mechanical and hesitant, but he did manage to put in a couple nice baby hooks.  He already holds offers from Notre Dame, Indiana and Purdue, so it will be interesting to see if he wants to follow his brothers to Duke or stay at home and make a name for himself in the Midwest.

Cody Zeller (6'9" Indiana Elite) - The younger brother of UNC rising sophomore Tyler Zeller plays a lot like his brother.  The most noticeable aspect of the game Saturday was the way he ran the floor.  If you are guarding him, you better get back or Zeller will burn you for easy layups.  In the pounding of Team United, Zeller also showed his range by stepping back and draining a three.  He has already been offered by Tom Crean at Indiana and will surely pick up several more as he develops more strength and a greater offensive arsenal.

Jacob Lawson  (6'7" PF NC Gaters) - Going into the matchup against Duke commit Josh Hairston, I did not expect much out of Lawson.  Surprisingly, he pretty much dominated Hairston, scoring 23 points, pulling down double-digit boards and swatting a few shots.  Lawson is a very bouncy forward and tries to dunk everything in the paint.  Even though the D.C. Assault had 3 starters committed to big time schools, the undermanned Gaters were able to make a game of it behind Lawson's strong play before finally slipping in the end.  Yet another NC player to keep an eye on. 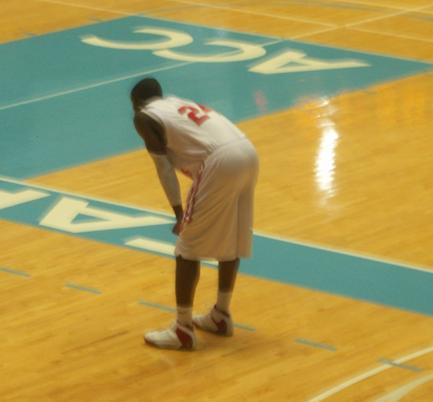 Melvin Tabb (WFU commit 6'8" CP3 All-Stars) - After a slow start to the spring at the Carolina Challenge, Tabb has since picked it up significantly.  We got word that he played very well in his previous AAU tournament and has continued his inspired play at the TOC.  Friday, Tabb was mentioned by PrepStars for delivering one of the top seven performances of the day.  In the afternoon session on Saturday Mel had a very effective first half of action, scoring 11 points and swatting two shots.  Moreover, he ran the floor, finished well and also showed a couple nice post moves.  After the half his team had the game under control and chose to rest him for much of the time.  CP3 won their pool and moved on to the championship bracket, where play started late Saturday night.

One thing we would like to see out of Tabb a little more is consistent effort on the boards.  At times he does not attack the glass and prefers to get out on the break instead.  Regardless, his skill level and athleticism are both very high and with continued work and coaching Tabb's ceiling is very high.

C.J. Leslie (6'9" Carolina Cobras) - CJ is probably the most talented player that I saw on the day.  However, talented and best do not always go hand in hand.  Leslie showed great range by stepping out and draining a couple threes and also had a few of his trademark athletic finishes and blocks in the paint.  On the other hand, he often tried to dribble despite being double and triple teamed, forced up bad shots and committed a few turnovers.  He was also quick to show negative emotions on the court towards both his teammates and the officials.  There is no denying the fabulous talent that Leslie possesses, but he will need to find a college coach who will prepare him for the NBA mentally and emotionally.

Reco McCarter (6'7" SG/SF Carolina Flight) - We caught Reco's final game of the day against the New York Panthers (who happened to have Danny Green as an assistant coach).  He had a strong first half, scoring 15 points on a couple long range shots, tough drives to the basket and free throws.  McCarter often disrupts passing lanes and does not mind mixing it up in the paint despite his thin build.  Clearly his greatest asset is his versatility, as he is able to handle the ball effectively, find the open man, and emphatically throw one down any chance he gets.  Reco finished the game with 19 points, as the Panthers ran away with it in the second half.  As his game continues to develop, it would be nice to see Reco become more assertive.

It has long been rumored that Mr. McCarter favors Wake Forest and may jump at an offer.  I hope to see him in the Old Gold and Black in a couple years.

Ray McCallum (2010)  / Myck Kabongo (2011) - These two point guards both impressed me a great deal with their respective teams.  McCallum knocked down the mid-range jumper with consistency and always seemed to be in total control of the game.  Kabongo captained a loaded Grassroots Canada team to perfection.  The Texas commit made all the right passes, alley oops, acrobatic layups and deep shots that one would expect from a high major point guard.  While I was trying to watch other games, these two players repeatedly caught my eye and seem to have very bright futures.

Random notes:  Fab Melo is an extremely large man.  The Indiana Elite 15s had two players over 6'11" who dwarfed the competition.  Recognizable faces in the crowd:  Deon Thompson, Will Graves, Sean Taggert, Danny Green.  Tarik Black of Memphis tried to break the rim on numerous occasions.  The 4-minute mercy rule was quite a common occurence on the day.  The Grassroots Canada 17's were the best team I saw today.