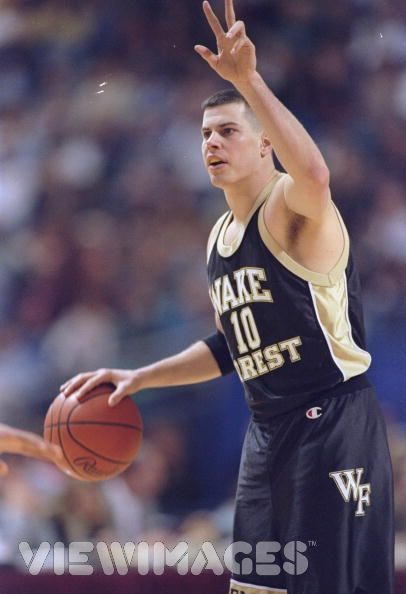 Rusty LaRue is coming back to Wake Forest, this time as an assistant coach.

Announced on Wednesday, LaRue will be the new assistant coach, filling the void left by the departure of Pat Kelsey to Xavier.

A three-sport athlete at Wake, Rusty was one of the most hard-nosed Deacons ever. He found success at basketball, football and baseball, but continued his career in the NBA after college.

After playing shortly in Europe and in the CBA, LaRue earned a spot on the Chicago Bulls. He won a Championship with the Bulls but left the team in 2000 before bouncing around between the Europe and the NBA. He retired in 2004 to take the Head Coaching job at Greensboro College before accepting the Head Coaching position at Forsyth Country Day.

At FCD, Rusty also served as the Head Football Coach for two seasons and the Athletic Director. The basketball team finished 21-8 in the 2008-09 season, losing their final game to Greensboro Day School.

Rusty was always a heady player and one incredible shooter. He took that experience and mentality into his coaching and he will make a great hire from that regard for a Wake team that needs help on the Xs and Os standpoint.

Wake shot 31.9 percent from beyond the arc last season and were second to last in the country in percentage of points from three-pointers in the Pomeroy rankings. LaRue should be able to use his experience as a shooter and in teaching high schoolers to help the Wake players with their mechanics and three-point strokes.

The hire is a good one as it is almost akin to keeping the hire inside the Wake system. Although Rusty was not coaching the Demon Deacons, he has stayed close to the program. Forsyth Country Day is just down the road from the Wake Forest campus.

LaRue is a passionate coach and knowing the high school system should also allow him to shift into having some success in recruiting. 2012 point guard prospect Tyler Lewis, whom the Deacs have been looking at, played his freshman season for LaRue and this may actually end up helping Wake land him.

Losing Pat Kelsey to Xavier was a tough blow to Wake basketball, but the hiring of Rusty LaRue softens that blow and his homecoming to Wake Forest should really provide to be a valuable addition to the Wake coaching tree.