Share All sharing options for: Pat Kelsey to Xavier 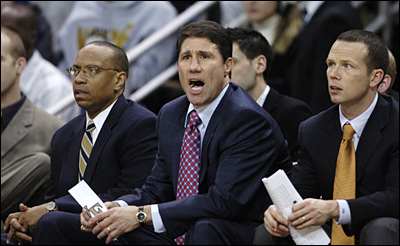 Sources are indicating that Wake Forest Assistant Coach Pat Kelsey will be taking the Associate Head Coaching job at Xavier.

What does this mean for the Deacs? Well first and foremost, Wake is losing a well-respected and likeable coach in their system. The players love Kelsey and he is one heck of a recruiter.

After being in the mix at jobs like High Point and Elon, Kelsey must have seen a number of advantages from the Xavier position.

Kelsey is a Cincinnati native. Before being hired as Wake, he coached at Elder High school in Cincy. He was hired as Director of Basketball Operations under Prosser in 2001 and was promoted to assistant coach in 2005.

He played at Xavier after transferring from Wyoming from 1996-1998 and obviously the ties to/from X and Wake Forest run deep.

Xavier is a terrific pipeline for future head coaches. Sean Miller, a former X assistant, rose through the ranks, became the Xavier head coach, and got the Arizona job.

Chris Mack was promoted to the Head Coach position after being an assistant coach under Miller and previously at Wake Forest under Skip Prosser.

This hurts Wake Forest's recruiting for the future, but it looks like the players that have already committed will stick to that. The Deacs will need a new associate head coach, which means they can hire outside or promote Director of Basketball Operations Walt Korbean. Korbean, naturally, is a 1991 graduate of Xavier and has coached at Seven Hills High School in Cincinnati, Northern Kentucky, Army and Indiana University Southeast.

The Deacs could always try and lure Rusty Larue away from Forsyth Country Day. Rusty could flat-out shoot the basketball and would be able to teach shooting technique extremely well. He could see flaws that are barely noticable and would give Dino Gaudio another guy who could help him offensively.

If indeed the rumors are true, congratulations to Kelsey and hopefully he can use this position as a springboard. His future is bright.