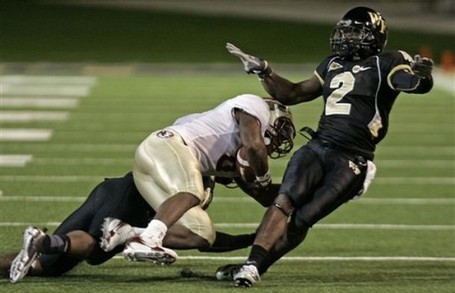 I'm a bit biased, but there has been no other Demon Deacon football player I enjoyed watching more than Alphonso Smith. That's why I'm following where he will be headed even more closely than the beast Aaron Curry.

Smith, a former quarterback from Pohakee, Florida, used those instincts to become one of the most prolific cornerbacks in the ACC. He set an ACC-record with 21 interceptions and had some of the best ball instincts I've ever seen.

I had the privilege of interviewing Alphonso on a number of occasions and he still stands as the best quote guy I've ever talked to (although Ish Smith, James Johnson, Aaron Curry, Chip Vaughn and Stanley Arnoux had some memorable moments too).

Where Alphonso really shines is in coverage. Smith told me once that he takes a different approach to playing cornerback than a lot of others do. Since he did play quarterback, he grew accustomed to knowing what routes were and when they'd be used.

So, rather than playing the quarterback--he'd know where the throw was already going--he'd play the receiver. If the wideout shortened his steps and started chopping, he'd be breaking down his route. Alphonso also said that depending on what side the receiver was favoring, he'd use that to know which shoulder the ball was coming to.

Because of this, it is really amazing that Smith even got the chance to set the ACC record--in his senior campaign, no one threw his way. He has great footwork, terrific vision and when he gets the ball in open space or makes an interception, because of his time as a return man, he plays it like he is a receiver and is always a threat to score.

Smith has enough speed to cover sideline to sideline, but he has recorded some slower times in official tests. He has superior leaping ability and is an adequate tackler. I've seen him make some big hits and also get broken down as well, but overall tackling is not his strongest attribute.

The biggest knock on the Phonz is his height, and justifiably so. He is 5-9 and had some trouble against the bigger receivers--Maryland's Darrius Heyward-Bey for instance had a lot of success against Smith this season--and the NFL is loaded with big, strong wideouts.

I have no doubt that Smith can put on a few more pounds. His best comparison right now is Adam Jones. I don't mean that in a negative way--Smith has no character issues whatsoever. Aside from his boisterous attitude, he is a team player who works hard and buys into the system. What I mean when I say he's like Jones is that Pac Man entered the league at 5-10 and there were questions about his height as well.

Adam Jones was a better return guy than Smith, although Smith has shown flashes, but in coverage Jones was best suited for nickelback. I think Alphonso can play and start at CB, but I also think he would be a top-flight nickel. With every team running three receiver sets, Phonz would see the field as much as a starter and would make an immediate impact. Slot receivers are also typically shorter and Smith could prey on those guys rather than being overmatched by big receivers like Larry Fitzgerald or Randy Moss.

As it stands, any team would be lucky to have Smith. His size will drop him a few more spots than his actual value and I see him going in the 20s somewhere. The Patriots and Ravens seem to love him and I wouldn't be surprised if either took him or even if he went before New England picks at 23.