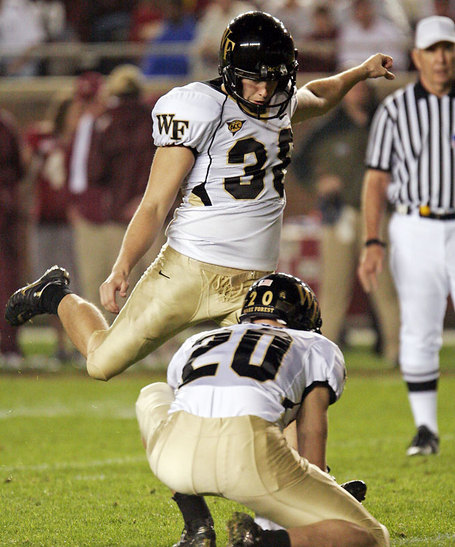 Wake Forest kicker Sam Swank will probably sit through the 2009 NFL Draft with his usual care-free smile and laidback demeanor, but don't think his fingers won't be crossed.

The draft status of an NFL kicker is almost as unpredictable as a Ryan Lindell 46 yarder into 60 MPH winds.  And that unpredictability is magnified by Swank's recent injury woes which contributed to his most recent season being the worst of his four-year Demon Deacon career.  Still, for his career Swank was 71/93 on field goal attempts (76%) including an astounding 9/13 (69%) from beyond 50 yards.  Swank only missed one of the 125 extra point attempts he had as a Deacon...

At any other position Swank would be a sure bet to get drafted given his position rank, but kickers are in large stock and low demand these days.  Over the past 15 years there is only an average of two kickers taken per draft, and no kicker has been drafted earlier than the fourth round since 2005 (Mike Nugent):

And in this year's draft I'm not sure if Swank is in the top two.  ESPN has him ranked as the fifth best kicker in the draft, although there is not much separation between fifth and first, Patrick McAfee (WVU).  If teams get a sense that Swank can return to the player he was before his injury, he could easily be a top two kicker.

Normally when discussing a player entering the draft, you discuss which teams are most likely to pick him up based on who needs that kind of player.  Again, the kicker is the exception to the rule.  In the NFL, kickers are picked up and dropped faster than Austin Croshere.  The teams with the statistically worst kicking last year were the Redskins, Chiefs, Broncos, and Jaguars.

Even if Swank doesn't get drafted, it isn't uncommon for kickers to get a second look in team workouts and training camps.  Let's keep our fingers crossed for #38 anyway, although I wouldn't tell him to break a leg.