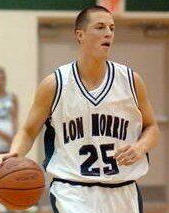 The newest Wake Forest recuiting rumor has been confirmed after it had its roots in social networking, as Konner Tucker has mentioned on both his MySpace and Facebook that he will be joining the Demon Deacons but a Scout article has now confirmed this.

Konner Tucker, the PG who played at JUCO college Lon Morris College in Jacksonville, Texas, averaged 17 points per game and shot 42 percent from three-point land last season. He is listed at 6'4" and 180 pounds.

Tucker was not highly recruited coming out of college and took a year to play junior college ball to raise his stock. It worked.

He originally committed to play for Billy Gillespie at Kentucky but with the recent news that John Calipari will be coaching UK, Tucker decommitted. He was known to be looking at "Marquette, Wichita State, Oklahoma State, California and Cincinnati among other schools."

There is an exodus of players leaving from Kentucky, as six players have already decommitted or announced their decision to leave the program. Calipari has a certain breed of players he wants in and the losses will give him room to sign players like John Wall, who he is really hoping to get.

"I'm just really not interested in Kentucky anymore or playing for coach Calipari," said Tucker. "I'm just trying to find the right fit for me. I'm moving on."

Here is what the Courier-Journal blog had to say about Tucker when he originally committed to UK:

"They just want me to hit shots and make plays," Tucker said. "They said I would play right away. I want to make my team better. I'm just so excited because it can't get any better than to play in front of the best fans in college basketball."

Tucker will instantly help the Deacs. As a 42 percent three-point shooter and a 46 percent shooter overall, he won't shoot that well in the upgrade from JUCO to ACC play, but he will help off the bench.

He provides depth in the event that Jeff Teague leaves for the League. He has the skills to play the point behind Ish Smith, but could also play on the wing and hit shots.

We'll be keeping a close eye on this situation as the Deacs are still looking at Skylar McBee and the status of Torgrim Sommerfeldt is still up in the air (we haven't heard much news about him lately).

As always, if you have any additional news about Tucker or have seen him play, feel free to post notes below.

Here is a YouTube video with a couple clips of Tucker: