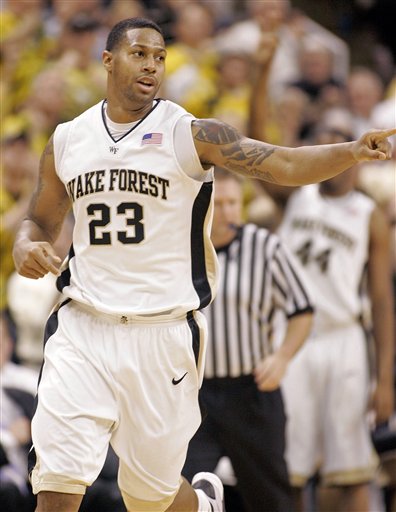 With the two seed in the ACC Tournament on the line after Duke's loss to North Carolina this afternoon, the Demon Deacons overcame the hot shooting of KC Rivers in the first half to beat the Clemson Tigers 96-88.

Behind a torrid second-half stretch in which Wake Forest made their first seven shots, the Deacs took the lead and never let up. They were led by James Johnson, who exerted his will down low, shooting 10-14 for 21 points, nine rebounds and three assists.

They had great efforts from almost everyone on the team--Al-Farouq Aminu had 21 points and ten rebounds, Ish Smith had 13 points and six assists, Chas McFarland continued his strong play of late with 14 points and eight rebounds (10-12 FTs).

Jeff Teague hit three of his five three-pointers and had 15 points, but was hurt by foul trouble. L.D. Williams had five points and four assists.

This was a strong game all-around and a great statement win for the Deacs, who helped their NCAA Tournament seeding with their sixth win in the RPI Top 25 on the year. They moved to 24-5 (11-5) and locked up the two seed, which means they will play the winner of the Maryland/NC State game on Friday.

Wake did a tremendous job breaking the Clemson pressure and cranked up the tempo which hurt the Demon Deacons defensively in the first half, as KC Rivers hit his first seven shots and first four threes. He finished with 21 points. Demontez Stitt also had 21, while Trevor Booker had 18 points, 10 rebounds and three blocks.

Clemson dominated with their hot shooting, but Wake used a quick attack of the middle to keep Clemson from getting into their defense. This is where James Johnson is at his best, when he can get a head of steam and power through his defender. When he takes it to the rack with strength, he is incredibly tough to stop.

The Deacs had a number of highlight-reel dunks, including one in which David Weaver passed it behind his back to Ish Smith, who then dished it to Aminu for the flush.

This team has found its swagger again and is on a hot streak at the right time. They've won six of their last seven and enter the ACC Tournament with a ton of momentum as they have gone back to basics. They are rebounding--Wake outrebounded Clemson 38-26. They're attacking the rim with authority--shooting 60 percent for the game and outscoring Clemson 58-40 in the paint. They're also getting to the foul line and converting, shooting 13-15 from the line. The team is stll undefeated when they shoot more free throws than their opponents.

This is a scary good team when they are rolling and have as good a chance as any to get to Sunday in Atlanta. They avoid UNC till Sunday assuming the Heels move on and have a pretty favorable path to the tournament finals.

This was a statement win--to the fans, to the rest of the ACC and to the NCAA Tournament committee who cannot overlook the Demon Deacons any longer. The only ones who can really stop the Demon Deacons are themselves, but every game matters from here on out and there will no longer be any question of motivation.

And just for fun: