Share All sharing options for: Wake Forest vs Clemson Matchups 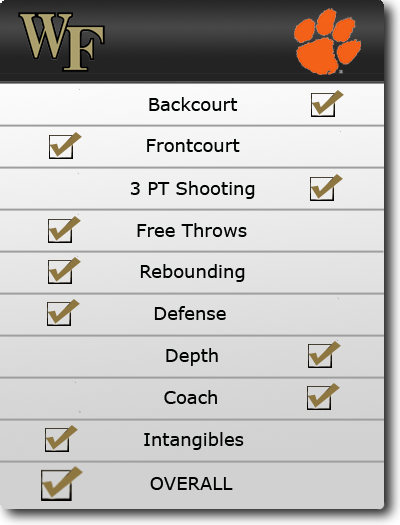 Backcourt: Jeff Teague/LD Williams vs Demontez Stitt/Terrance Oglesby/K.C. Rivers: We put Rivers in the backcourt because of his style of play and the fact that he is only 6-6. Once we put him in the backcourt it was clear Clemson takes this category. Jeff Teague is still a monster but he has been struggling to find his shot, only hitting on one of six from range at Maryland. LD should cause some perimeter problems for Oglesby, but right now Terrance is hitting nearly 40 percent from deep. Stitt is their leading assist man at 3.8 per game. Rivers is really the player that Wake needs to watch out for. He comes in averaging 14 points and 6 rebounds per game and he hits 39 percent of his threes. Rivers nearly came to Wake during his recruitment, but unfortunately for the Deacons he is wearing Clemson orange to these matchups.

Frontcourt: James Johnson/Al-Farouq Aminu/Chas McFarland vs Trevor Booker/Raymond Sykes: Booker is a stud who averages nearly a double-double and is Clemson's leading scorer at 15.1 points per game. Wake's size inside was able to neutralize him last meeting, where he went three for nine for nine points. Sykes also struggled last game against Wake hitting three of his 11 shots, for eight points. After putting up amazing numbers, Johnson hasn't scored double figures in the last two games. He looks to match his last 19 point eight rebound game at Littlejohn. Aminu is coming off a 16 point 14 rebound game at Maryland, where he was voted Man of the Match by the Blogger So Dear readers. Wake will try to use it's size again to minimize the impact of the Clemson front line.

3 PT Shooting: Very lopsided here, Clemson shoots a stellar 38 percent as a team which puts them 39th in the country. Wake comes in at 33 percent, which puts them 228th in the country in terms of percentage. In addition to that, 30 percent of Clemson's points come off threes, while Wake only utilizes the long ball for 15 percent of their total points. Major edge to Clemson here.

Free Throws: Clemson has been a notoriously bad free throw shooting team these past few years, and this year isn't any different. Clemson comes in just under 69 percent at the stripe, while Wake shoots just under 71 percent. Additionally, Clemson only uses free throws for 17.3 percent of their points, which puts them at 307th in the nation for that category. Therefore, Wake takes the free throw edge.

Rebounding: This was a very tough category for us to grade out, Wake has definitely been improving on the boards and now ranks 74th and 66th in offensive and defensive rebounding efficiency respectively. Clemson is great on the offensive glass (17th in the nation) but atrocious defensively at 293rd in the nation. Definitely an interesting battle but this goes as a slight edge for Wake because of their improved defensive rebounding.

Defense: I love Oliver Purnell's trapping defense, and personally wish Wake would implement it a little more often. Right now Clemson checks in at 31st in the nation in defensive efficiency, while Wake is 13th. Clemson thrives on steals and blocks. The Tigers are 6th in the nation in steal percentage and 11th in block percentage. Last game Wake was able to break this press for easy buckets which can be the fatal flaw of this defense. Wake's defensive specialty is defending the three; where they are 9th in the nation in opponents' three point percentage. This category is a slight edge to Wake, but both of these teams can dominate defensively at times.

Depth: The big men for Wake really are not doing anything off the bench right now, the sole contributor is Ish Smith. Gary Clark has shown bright spots combined with silly mistakes. Clemson on the other hand can bring a few solid players off the bench. David Potter provides some good minutes off the bench, and Tanner Smith brings good energy and hustle to the floor. Andre Young has a very good 2.7/1 assist to turnover ratio off the bench for Clemson. Therefore, this category goes to the Tigers.

Coach: Dino has the team playing well right now winning five of their last six. However, Purnell consistently puts his Tiger's in a position to win year in and year out. Another tough contest because of Clemson's late struggles, but to this point in their careers, we give the coaching edge to Clemson.

Intangibles: Both teams are solidly in the tournament so there is no real bubble that these teams need to worry about. Clemson is still trying to win a bye for the first round of the ACC tournament, so they will have that going for them. Wake Forest could possibly seed 2nd with a win at home in this game. Also this is Wake's senior night, and Harvey Hale's last home game. Wake has won their last four senior days coming into this game with Clemson. Because both teams are still fighting for ACC tournament seeding, Wake takes the edge because of home court and senior night.

Overall: In this matchup of two top 20 teams, Wake Forest takes the edge overall. Clemson has been struggling a little bit while Wake appears to have turned around their midseason struggles. The crowd is one variable to watch because spring break has started for the student body so there could be a lot of empty seats behind one of the baskets. Another thing to watch is whether or not Wake can break the trap and get some easy baskets. If Wake can do that again, expect Wake to come out on top.  However, if Wake turns the ball over Clemson could put a damper on Wake's senior night. This should be a very entertaining game against two teams that could make a run in March.