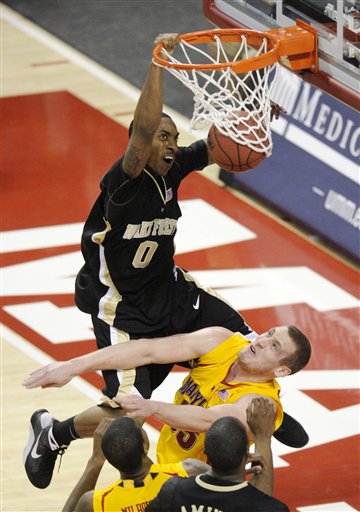 Early on, it looked as if February's road woes would continue into March for Wake Forest as Maryland jumped out to an early lead and looked like the better team in the first half.  However, around strong second half  play from Al-Farouq Aminu, Ish Smith and Jeff Teague, the Deacons were able to rally and grab an enormous win in College Park by the count of 65-63

After Maryland recovered from Wake Forest's run in the second half and jumped out to a five point advantage, it looked like it might be danger time for Deacons.  However, behind a few tough layups by Ish Smith, consecutive three pointers by Smith and Jeff Teague and a monstrous dunk by Teague, the Deacs fought back and assured themselves a bye in the ACC tournament.  While Wake has had some big wins, this one definitely comes at the right time since they are now guaranteed a 2nd or 3rd seed in the ACC tournament as long as North Carolina wins one of their last two games.  If Wake beats Clemson on Sunday night and UNC beats Duke, Wake will claim the two seed.

As I mentioned in the lead-in, the first half was just ugly for the Deacs.  They came out much like they did in the NC State, Miami and Duke road games and got behind by seven fairly quickly.  Greivis Vasquez got out to a fast start, scoring seven points early on to pace the Terrapin attack.  Wake definitely did not help itself out either, giving the ball away eleven times in the first half alone.  The half ended appropriately, as Dave Neal drained a fade-away three and barked at the Wake Forest bench in his final regular season game in College Park.  To add insult to injury, Chas McFarland, who scored the first four points for the Deacons, sprained his knee early on and did not return.

The second half was much more entertaining to those with Wake Forest rooting interest.  It started out extremely well, as Wake continued to do the only thing they did well in the first half - rebound.  Overall, Wake out-rebounded Maryland 50-32, including an astounding 19 offensive rebounds that led to 20 second chance points compared to only 6 for the Terps.  Wake pulled ahead early in the second half by virtue of this and taking better care of the ball until the Dave Neal show commenced.  Neal drained three consecutive trifectas and pulled Maryland back ahead around the six minute mark.  At this point it felt like the Deacs may run out of gas and drop another ACC game on the road as a result of starting slow and having to fight too hard to catch up.  To my delight, Ishmael Smith stepped up and played a huge second half in the clutch and Aminu collected the garbage to give the Deacons the final push they needed down the stretch. The exclamation point was added when Jeff Teague drove baseline and absolutely embarrassed Dave Neal (video below).  I'm sure he regrets his guesture to the Wake bench in the first half tonight as he sees himself all over Sportscenter.

An important aspect of the game that cannot go without mentioning is the defensive adjustment that Coach Gaudio made down the stretch.  He employed a 1-3-1 zone with the length of Aminu on the point that looked to really bother the Terps.  They went cold from deep and were often blocked by Aminu, Johnson or Weaver if they took it inside.  As a matter of fact, Vasquez was held scoreless in the final 17 minutes of the game.

As for stats, the Deacs were lead by Aminu, who scored 16 points and collected 14 rebounds.  The guards contributed a vast majority of their points in the second half with Teague and Smith ending up with 17 and 11, respectively.  James Johnson had another quiet game on the scoring side, but did manage to end up with 9 points and 8 rebounds.  Maryland was paced by Dave Neal's 19 points on senior night and Vasquez's 16 on only 7 of 24 shooting.

Now the Wake Forest players get a well-deserved break as they head into mid-term exams and do not have another game until Sunday night at home versus Clemson.  While this game is important for NCAA tournament seeding, the Deacs should be able to play with less tension since they handled the Terps and got the bye wrapped up tonight.

And now for the main attraction: