Share All sharing options for: Tony Bennett to Virginia 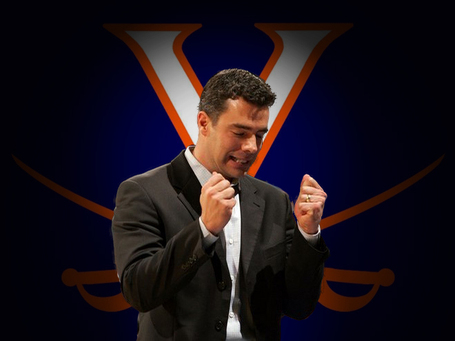 Tony Bennett, head basketball coach of the Washington State Cougars for three years, will be leaving Pullman, WA to go to Charlottesville, VA, home of the Virginia Cavaliers.

Bennett's decision came as a bit of a surprise to WSU fans and players, who had grown accustomed to the slow, defensive-minded style that Bennett was known for. In three years at Washington State - his first head coaching position - Bennett was 69-33 (0.676) with two NCAA tournament births...

Prior to Bennett's arrival in 2006, WSU had only been to the 64-team dance once, a first round loss in 1994. In just three years with the Cougars, however, Bennett accumulated a 3-2 record in the tournament, including a sweet sixteen appearance in 2008.

In fact, Washington State has had more tournament success than Virginia of late. UVA has only one tournament win in over a decade, and has only been invited to the madness once in the past seven years. Some are questioning if Bennett is making the right decision by leaving an average Pac-10 team to go to a Virginia team which has finished bottom-three in the ACC in each of the past two seasons.

So what does this mean for ACC fans?

Well if nothing else, it means you shouldn't expect to score many points against the Cavaliers anytime soon. Bennett's teams have been in the top 25 in the nation in defensive efficiency and in the bottom 25 in the nation in tempo in each year of his three year tenure at WSU. Wake Forest actually received help with their new pack-defense from Tony. And why not, in this past season, the Cougars only allowed 58 points in their first two games... combined. (Yes, combined.)

One of the knocks on Bennett is that he doesn't recruit all that well, at least not nationally. But this makes his accomplishments even more impressive. Bennett is one of the best in the nation at getting the most out of his players, and isn't that a coach's job, after all? So although he might not lure great players away from your school, he might make you wish you recruited his players.

And as if Bennett's resume wasn't remarkable enough, he's only 39-years old. With a mature demeanor and a veteran calmness that his player's notoriously reflect, you wouldn't know that he was playing professional basketball just 12 years ago.

It may take a few years, but Virginia won't be bottom-feeders of the ACC for long. At least UVA hopes not. They're betting $1.7 million a year for the next five years on it.