We talked a bit about Quincy Miller and Marquis Rankin in our other article, but I just wanted to share a more detailed scouting report and a few quotes from both Miller and Rankin.

Quincy Miller , a 6’7", 200 lb SF from Quality Education in , would be a perfect fit at Wake with his body type. He is extremely athletic, but what stands out most about ’s game is his versatility.

He is a terrific passer and seems very willing to get his teammates involved. Miller has a good vertical leap and is a good dunker, but he also surprised me with his ability to handle the basketball. If he didn’t blow people away at Telep’s Carolina Challenge, it is because he was more often willing to play an inside-out game with his teammates than force a shot. On two separate occasions, Miller was double-teamed down low (as he can play a bit of PF as well). Rather than force it up against the double-team, Miller the first time passed it to an open teammate down low for a quick two. The second time, he head-faked, causing both players to bite, and got an easy reverse layup. It is easy to mistake Miller’s lack of scoring in the Challenge as an inability, but you would be mistaken. He has a smooth shooting stroke to go along with his other skills and he has the frame to get much bigger. He reminded me of Kevin Durant coming out of high school with his handles, lankiness and long arms, as well as his shot. Not a bad person to be compared to. When asked about , Miller lit up. He said that he had been talking with Coach Muse since the summer. He also said that "I want an education first before I even play basketball."

In addition to Wake 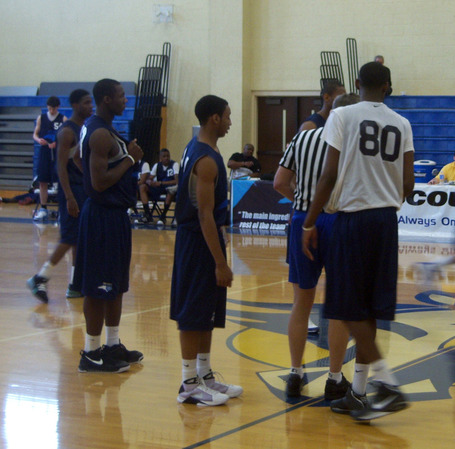 Marquis Rankin sure dazzled the audience on Saturday and there is no doubt that more teams (I can think of two blue-colored teams in in particular) will be on him after his performance.

What stood out about Rankin was his fearlessness. He is not the biggest point guard in the world at 6’0" 160 lbs, but the Vance guard is unafraid to take it to the tin at any time against anybody. And he finishes. The kid can really get up and had some unbelievable dunks over the course of the day. Rankin is extremely quick and can run the break very well. He has terrific handles and it is obvious that point guard is his natural position. He made some very good passes, but Rankin is a scorer first. When asked about his strengths Rankin said, ""I can take it to the basketball really well and I have a good mid-range jump shot." He also mentioned that he liked Wake’s style of play. I saw Rankin in the playoff game against Tabor and his jump shot was off in that game (mostly because of the fact that future Demon Deacon guard C.J. Harris was a terrific defender), but he looked like a different player on Saturday. His confidence really showed and the Deacs need confident players as well as players with a high basketball I.Q. and Marquis has both. Rankin said that he had been in contact with Wake for a while now and that he had been talking with Assistant Coach Jeff Battle. Marquis has also been contacted by Virginia Tech, Clemson and , but out of those he said he liked Wake, Virginia Tech and Clemson.

Just for fun, here is a bonus video of a Deuce Bello dunk: