As Jake previously mentioned, several of us from Blogger So Dear attended Dave Telep's third annual Carolina Challenge at Cary Academy on Saturday. Props again to Telep, who put on an entertaining event.

Here is our extended recap, including scouting reports on several Wake prospects after the jump...

J.T. Terrell: (6'3", 175 lbs, SG) J.T. Terrell can fill it up. He is a scorer, plain and simple. The kid is not afraid to take any shot at any time. And boy is he vocal. He's the type of player who will shoot, even when he is cold, but if he has missed five straight shots, he will shoot again and hit the sixth and get hot.

Terrell is a lot more athletic than I was expecting him to be, as he had very good jumping ability. He threw down some rim-rattling dunks over the course of the day and finishing a couple alley-oop opportunities.

Most importantly, he's a leader. He has a confidence about him that shows. He will be an ACC starter-at 6'3", he is a good-sized combo guard and he showed some good effort on defense as well. I came away very impressed with Terrell. 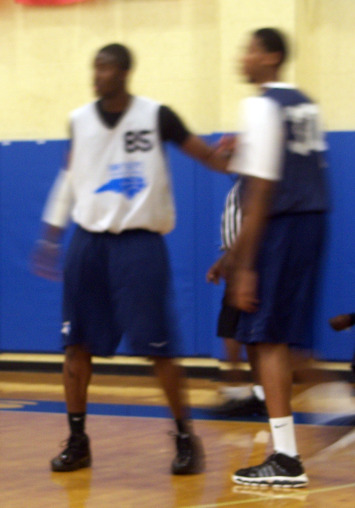 Melvin Tabb: (6'8", 211 lbs, PF) There is no question that Melvin Tabb possesses a variety of skills on the basketball court. He has a frame that will fill out with more work in the weight room and has the height to play both the three and the four in college. He has adequate ball handling skills, enough to play on the perimeter.

But that's the problem with Tabb. He thinks he should be playing around the perimeter all the time. He can certainly throw it down with the best of them and he has a good mid-range game and a stroke out to the three point line, but he did not show a ton of effort on the low block. He can face up, but cannot back down very well. He did not go after rebounds.

If he gets some solid coaching, he could be a star. His body type dictates that he could be an absolute beast down low, but he needs to learn positioning and gain some better work ethic. There's no questioning his talent level though. 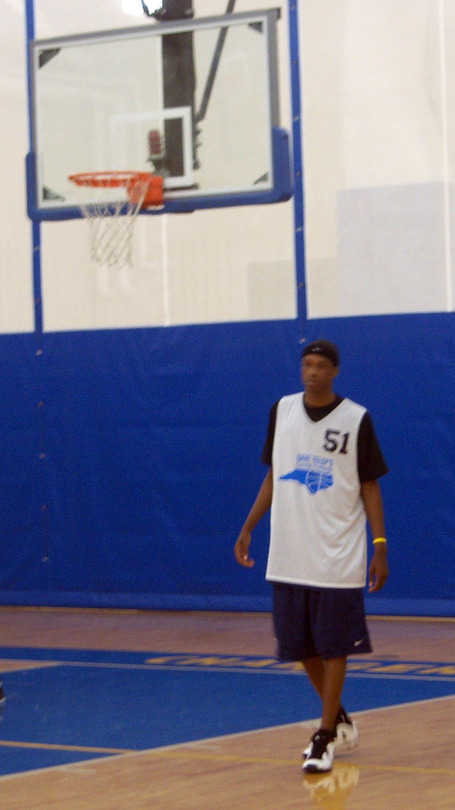 Reco McCarter: (6'7", 175 lbs, SF) Reco McCarter sure resembles Josh Howard. He has a lanky frame and some skinny legs, but he could fill out more and get stronger. He needs to get better at finishing around the hoop, but he has a great skill set.

McCarter works hard on both ends of the floor, fights for rebounds and talks to his teammates. He shows a lot of effort defensively. His shot has a good release point, but  needs more arc. He can handle the rock and really gets up high when he dunks. He is a tailor-made small forward. This kid deserves an offer to Wake Forest. He would really shine. 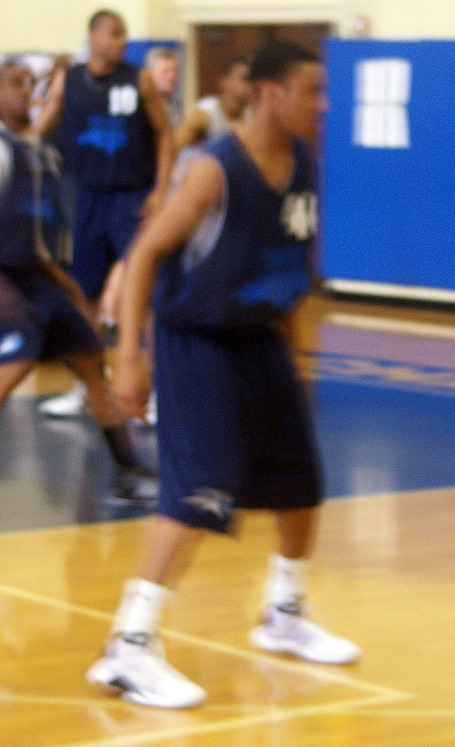 Marquis Rankin: (6'0", 160 lbs, PG) Rankin was the best player we saw all day. He can do it all. In the first four minutes of one of the games we watched Rankin had a monster dunk where he split two defenders down the middle and two quick break lay-ups.

Rankin has some serious ups for a six-footer. He is extremely quick, has terrific handles and is completely fearless. He is not afraid to throw his body into the lane and he can finish. He can really dish it out too and he hustled on defense.

Marquis reminded me of when Jeff Teague is playing at his best. Teague has stretches where he can't be stopped and when he shows the ability to be a terrific defender, blocking and stealing the ball, but he doesn't do that all the time.

Rankin shows that mindset the entire time he is on the court. And he was just a sophomore this year. This kid could be critical good. The only problem is that he may not grow any more. He looks like he might stay at six feet, but even so, he is a prime time player. 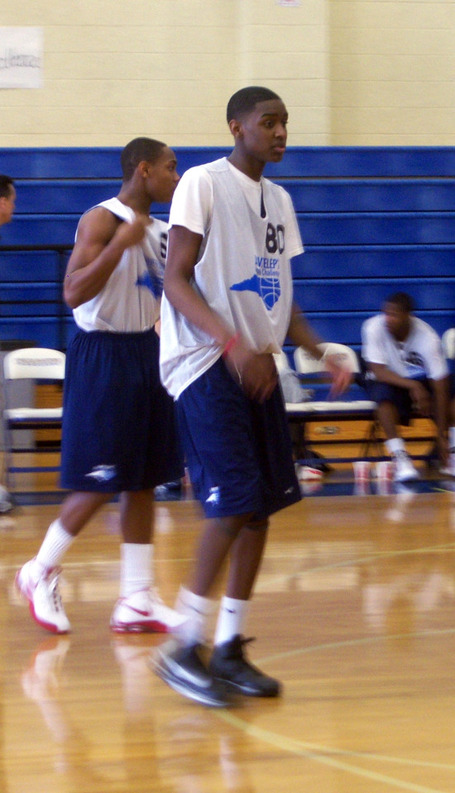 Quincy Miller: (6'7", 200 lbs, SF) Quincy Miller has some very long arms and legs. He could honestly put on another 40 lbs and still look skinny. The kid didn't wow anybody in the Challenge, but he sure impressed me.

He has great basketball instincts for a bigger player. He had good handles and in a game where every player was trying to get their shot off all the time he didn't rush anything or force it up. He was a terrific passer for his size.

Miller needs to get better at finishing around the hoop and is more comfortable around the perimeter. His best comparison right now was a high school Kevin Durant. He needs to fill out, but he has a smooth stroke and great hands. Offer him now.

Deuce Bello: (6'3", 175 lbs, SG) I know Deuce Bello is a big time recruit. I get it. He is a super freak athlete with the ability to jump out of the gym. But I just don't get all the hype. He isn't the best shooter. He doesn't finish his shots with contact. He isn't the best ball-handler. He is a decent defender, but nothing special.

Right now, I would compare Bello to L.D. Williams. He can really dunk the basketball, but how often are you going to get the opportunity to do a windmill dunk from a standstill in a game? Once in three years?

Bello has a lot of upside, but I'd rather take a guy with a smooth stroke who is an inch or two shorter or a small forward/power forward like Quincy Miller who has just as much upside. Wake's had plenty of super athletes in the past and not enough shooters.

Bishop Daniels: (6'1", 165 lbs, PG) There's no questioning Daniels' ability. He can take the ball strong to the rack and is very versatile. He has good hands and a good midrange game. He doesn't have the best shot from distance. He really does not enjoy passing, but he can when he wants to.

Therein lies the problem with Daniels. He is another guy with a ton of upside (and he could grow up to two or three more inches), but I don't really enjoy seeing players who don't look like they care all that much out on the court. He just seemed to be going through the motions out there and didn't have that cutthroat mentality that a guy like Terrell had. Daniels still deserves an offer, but if I had to take him or Rankin, I'd absolutely take Rankin.

Jackson Simmons: (6'8", 190 lbs, PF) Jackson Simmons is a hustle player. He works his butt off every single play and there is something refreshing to that. He is one of those glue guys that every team should have.

Simmons sets screens, rebounds and has a high basketball IQ. He was always in a good basketball position and always put himself in a place to make plays. The only real problem with Simmons is that he needs to play PF, but at 6'8", 190 (and that was generous), he is undersized.

But they said that about Hansbrough too I guess. Some teams are going to really miss out on Simmons and be sorry when he does the little things against them. I really liked this kid. 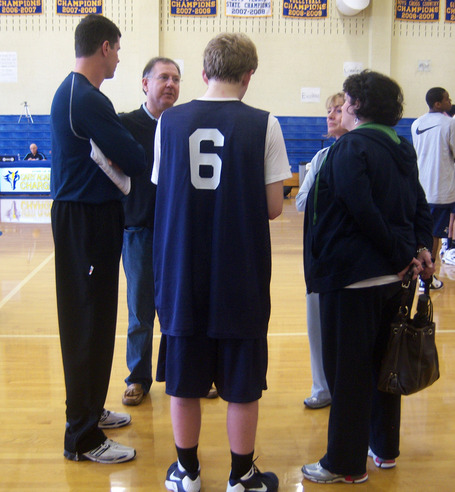 Tyler Lewis: (5'10", 145 lbs, PG) Lewis is going to be a star. At only a freshman, he carried himself with a lot of confidence for a kid around a lot of other stud N.C. prospects. That really impressed me. He plays for Rusty LaRue at Forsyth Country Day and it showed.

Tyler can really shoot the basketball. In a shooting drill with a bunch of the guards, Lewis never missed. That's not even an exaggeration; he hit everything-midrange, distance, lay ups, runners. He can flat-out shoot and is way better than he looks at 5'10" (again generous). He needs to bulk up and here's hoping that he grows a few more inches, but even if he hits just under 6'0", he is going to make some team very happy.

Lewis has incredible court vision as well. He makes great passes and sees seams that are barely there. He is extremely quick and runs the break effectively. Here's hoping that Wake Forest doesn't miss out on Lewis.

Sebastian Koch: (6'8", 180, SG) Koch, in the class of 2010, plays at Christ School. He is an absolute shooter, with the length to get his shot off at any time against anybody. Aside from that though, he is too skinny and can't get to the hoop.

He stays around the perimeter and can't rebound at all. He also can't really defend. He is quick enough though and hustles. He will get an offer somewhere and hit a ton of shots in the right system...for instance a certain Horizon League team.

Anthony Gill: (6'8", 205, PF) Ok, so I guess Gill has interest from Wake Forest, but he just isn't good enough right now to be a Wake player. He is in the class of 2011, so he has a lot of time to get better, but he didn't show me much. He disappeared in games unless he decided to try.

Gill had one four minute stretch where he showed his talent, but he doesn't follow his shot and seemed a bit lazy. He really needs to show up and play as a stronger PF. Gill might be an ACC player, but if I was Wake, I'd pass on him.

Paul Larsen: (6'6", 210, PF) Paul's biggest problem is he is a true power forward, but he isn't going to get any bigger than 6'6". He already hit his peak. That doesn't mean he isn't skilled. Larsen had a soft touch around the hoop and could really jump.

Larsen is a terrific rebounder and is going to be a great player at a mid-major school where 6'6" isn't exactly too small for PF. I really liked his game.

Luke Troutman: (6'9", 220, PF/C) Troutman is a guy you want on your team. But just where he plays will be a mystery. He does not currently have any offers in the class of 2010, but he will and deserves to be playing basketball somewhere.

Troutman had a soft touch as well and his range was about out to 12 feet. He has good basketball instincts and good footwork down low. He finished his shots and rebounded well. He is a bit undersized as he is ideally a center for his game, but he has a Brian Butch-like game and I enjoyed watching him.

If anyone else attended the event and wants to add anything, feel free. This was a great day and it was really fun to watch our commits and recruits play over the course of a few games.

Wake is recruiting some great players and it is always good to see them in action and fill out their games rather than just reading about them. Keep an eye out tomorrow for our video on the 2011 and 2012 players.