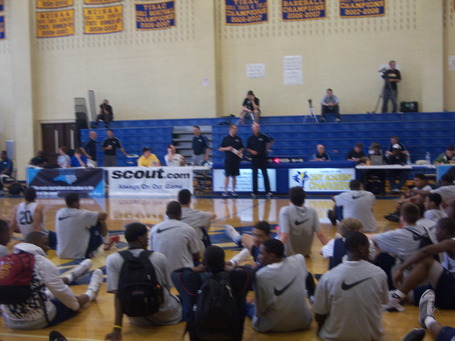 Saturday marked this year's edition of Dave Telep's Carolina Challenge, where the top high school basketball players throughout the state of North Carolina were invited to show off their skills.  They certainly did not disappoint and proved that the 2010 and 2011 classes are very strong locally.  The top-rated players in this event included Reggie Bullock (UNC), C.J. Leslie (Memphis, N.C State, etc), Melvin Tabb (WFU), J.T. Terrell (WFU), Ian Miller (FSU), Jarrell Eddie (VT) and P.J. Hairston.  The number one rated player in the class of 2009, John Wall, also made an appearance as well as Duke player Miles Plumlee, whose brother, Marshall, is an intriguing 2011 prospect.  At one of the intermissions Telep delivered a speech to the players in attendance, encouraging them to play hard at all times. The main message was that even though a college coach may not be allowed in the gym during AAU season this spring, they will find ways to get reports on their prospects.

Throughout the day we were able to see many high-flying dunks, spectacular passes and, of course, turnovers galore.  Since these players are not used to playing with each other and looked to be very fatigued by the end of the day, things did not always go as planned.  However, these plays were far overshadowed by some great individual performances.  Since this is a Wake-based site, we tried to watch the games that featured the greatest amount of Wake prospects. Part one of our comprehensive write-up is available now and  features videos, interviews, analysis and photos of our Demon Deacon prospects, including J.T. Terrell, Melvin Tabb, Reco McCarter, Deuce Bello, Quincy Miller, Marquis Rankin and several others.  Just as an advance look, we came away most impressed by Rankin and Terrell on the day.  Make sure to check back tomorrow to see why!

On behalf of Blogger So Dear, I would also like to thank Dave Telep for organizing this fantastic event.  It is very well ran and we look forward to attending annually to check out the talent within the state.  Additionally, we would like to thank the guys from Deacon Sports, Wake Forest's Scout affiliate, who helped us keep track of our prospects throughout the day.

A couple bonus videos for you guys that clicked through: