Share All sharing options for: Would Seth Curry transfer to Wake Forest? 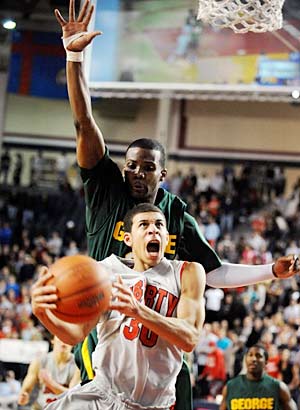 With the news that Liberty freshman Seth Curry, who led all freshmen in scoring at 20.2 points per game, is transferring, the question begs to be asked, if any or all of James Johnson, Al-Farouq Aminu and Jeff Teague leave for the NBA, would Wake have a shot?

My gut says, absolutely. Although Dino Gaudio is taking a ton of criticism lately and Pat Kelsey's status is up in the air with the High Point job, the point is, the team is bringing in some good players.

After Seth sat our a year, he'd be coming in with some pretty good players, J.T. Terrell, Tony Chenault and Melvin Tabb. He'd be playing with juniors Ty Walker and Tony Woods, as well as senior Gary Clark and he'd have sophomores C.J. Harris, Ari Stewart and Torgrim Sommerfeldt. That is a pretty stacked team with good guards and good size.

Not to mention, Wake's system is one that allows guards to score. Ish Smith has free reign on offense and there were times where Jeff Teague could do whatever he wanted in isolation. James Johnson took over that role a lot more in the second half of the season.

That extra year would give him more time to work on his defense to get it up to ACC-caliber, but it's not as if Teague and Smith this year were close to the All-ACC Defensive team, although they did put out effort and make some special plays here and there.

Curry would have a chance to play Virginia Tech every year, which shunned both him and his brother Stephen. Seth went to Liberty because of the school's academics and its strong Christian background, but most importantly because Flames gave him a chance to play right away.

But it is evident that the Big South isn't quite enough of a conference for him. He averaged over 20 points as a freshman with defenses keying on him every game. The team around him wasn't special. If he was surrounded with better players, he could really shine.

Wake always is looking for a shooter it seems like. They are hoping Torgrim Summerfeldt will become that, but there is no doubting Curry has that ability. He shot 35% from beyond the arc, not stellar numbers, but he took a ton of shots, with defenders in his face. He also pulled down 4.4 rebounds and had 2.3 assists with 1.4 steals per game. At 6'3", he has good size and improved his ball-handling over the course of the year. I watched him at the beginning of the year and he really turned it over a lot, but he ended the year with 2.3 TO per game, not terrible for a guy who has the ball as much as him.

There is no reason that the Deacs couldn't use Curry. He has the skills to play in the ACC and it is silly that he wasn't there to begin with to be honest, especially after how special a player that Stephen became. But, too many programs wouldn't give Seth the chance to play immediately, which is funny because now he still has to sit out a year because of the transfer.

Having that chip on his shoulder would help. Tyrese Rice always went off against Wake and a lot of it probably had to do with the fact that he wanted to come to Winston-Salem and the Deacs got caught with their pants down waiting on Chris Paul to decide whether he was leaving or not. He'd get the chance to show everyone what they were missing.

A ton of teams are interested obviously, but I've got to believe Curry ends up in the ACC. He's from Charlotte, but I don't see him playing at UNC or Duke with all their talent. He couldn't be a star there. NC State has a great recruiting class and they really want John Wall.

Virginia Tech is in the running since his dad was a star there, but the fact that they spurned Stephen and didn't jump all over Seth may hurt them. Virginia needs a new coach and they don't have anyone right now to woo Seth.

Georgia Tech has Shumpert and always brings in high-profile recruits. Could Maryland be an option? Gary Williams doesn't exactly jump all over players to "recruit" them, but Seth could shine there, especially in Williams' system. I wouldn't see him going all the way to BC, Florida State or Miami. He really loves his family too much to be that far away. Liberty is in Lynchburg and wasn't a terrible drive to his home in Charlotte.

Clemson might work. Oliver Purnell has good players to surround Curry with, but they aren't blue-chip guys that would play over him. But Seth would have to really make a commitment to defense, as Terrence Oglesby had to (and he has--he really made strides this year defensively).

But really Wake makes a ton of sense. It is a small school, much like Liberty. It is only an hour-plus away from home. His dad, Dell, is great friends with former Demon Deacon Muggsy Bogues, who always attends games and is a great ambassador for the Deacs. Bogues' daughter attends Wake Forest now, so he has a feel for how the school is even he graduated in 1987.

BSD will obviously be keeping a close eye on Curry, even if Wake is not in the running. He's a good kid and a great player and here's hoping the Deacs can reel him in.