I was wrong about Syracuse

Share All sharing options for: I was wrong about Syracuse 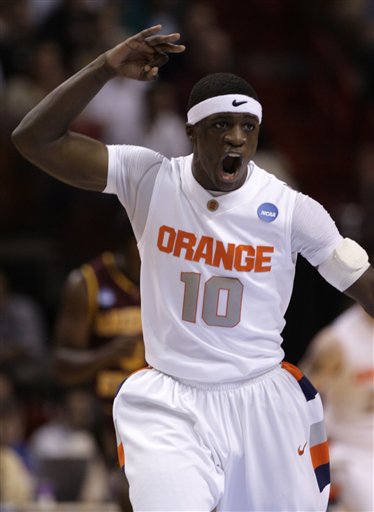 Take it out on me, but I'll admit I made a mistake. After watching the Orangemen's 78-67 win over the Arizona State Sundevils, I believe this Syracuse team has all the pieces to make the Final Four.  But will they?

All year I thought there was something missing from Jim Boeheim's Syracuse team. Or I just took my bias out on them. Or they weren't playing up to their potential when they lost seven of ten earlier in the season.

I thought for sure they'd lose to Arizona State, who was disciplined and able to make the right passes to bust 'Cuse's zone. But, Jonny Flynn is a special player, and no one has been playing as well as him in the entire country right now. Not Blake Griffin, not Ty Lawson, not Terrance Williams, not Tyreke Evans.

Flynn makes very few mistakes and completely takes over games. He had 11 points and seven assists to just two turnovers today. When Arizona State cut the lead down to six, Flynn drove the lane and kicked it out to a wide open Eric Devendorf, 21 points on the day, who hit the three and Syracuse was back in the driver's seat.

This team has everything a team needs to make it to the Final Four. They have strong post players in Rick Jackson and Arinze Onuaku--who combined for 11-16 shooting, 25 points and 11 rebounds, an X-Factor in superfreak Paul Harris, the volatile hothead in Eric Devendorf (who drained another three after the first one to basically seal the game today) and an absolute stud guard in Jonny Flynn. They also have a sharpshooter in the mold of Lee Humphrey in Andy Rautins (5-9, 3-7 from 3pt today).

All this was accentuated by the fact that James Harden flat out stunk today. He was 2-10 and didn't even score until the second half. He hit his first bucket of the game with just under 10 minutes to play after not hitting a shot from the floor until four minutes were left yesterday. Either something is up with Harden or he just didn't care. The kid is a top five pick in the NBA Draft, but he really hurt his team out there.

Maybe he wasn't being used effectively in Herb Sendek's offense (he did seem like just another player out there), but a guy like Harden has to want the ball and want to score. He finished with 10 points, six rebounds and five assists, but those stats sure felt hollow.

This team should be tired. They should be, but they don't seem to be. Flynn and Devendorf played all 40 minutes today after playing more than 38 on Friday. But these are teenage kids and they play basketball constantly. There will be plenty of time for them to rest after the season. Boeheim already has a championship, so the questions about his abilities to coach in the postseason have been laid to rest.

They still could lose, but that's not the point. The point is, I was wrong about this team. They can do it, and that is something I wasn't sure of before today.