Share All sharing options for: Wake Forest vs Maryland Matchups 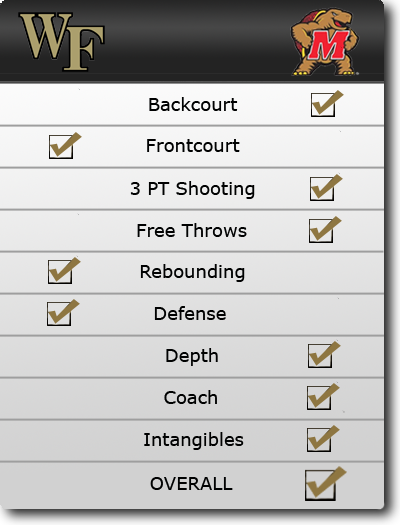 Backcourt: Jeff Teague/LD Williams vs Greivis Vasquez/Adrian Bowie/Sean Mosley: Teague has only put up 12 points in back-to-back games now and sometimes needs to work to get open on the offensive end more. Ish and Teague are still working on figuring out how to move around on the floor together. LD played a very solid game defensively at Virginia and was voted by you all as the post game player of the game (tie with Chas). That defense will be needed to help limit Maryland's star, Greivis.

Vasquez comes in averaging 17.1 points, 5.5 rebounds, and 4.7 assists per game. He is a great free throw shooter and causes mismatches all over the floor because he is six feet, six inches tall. Greivis put up 33 in the most recent win against NC State, 10 in the loss to Duke, and a triple double, 35-11-10, in the overtime win against Duke. If Greivis goes off again, Wake will be in trouble. Bowie puts up 9.4 per game and Mosley averages five per game for the Terrapins. Maryland takes the backcourt because of how impressively Vasquez has been playing and how Teague has tapered off.

Frontcourt: James Johnson/Al-Farouq Aminu/Chas McFarland vs Landon Milbourne/Dave Neal: Pretty easy swing for Wake. Chas has put together back-to-back solid games. And while James didn't play all that great against Virginia, he has still been on a tear these past couple weeks. Farouq's play has been a little sloppy recently so we will have to keep an eye on that.

As a whole, this group brings much more size and athleticism to the frontcourt than Maryland. Milbourne is a very good player, averaging 12.6 points and 5.3 rebounds per game on the year. Landon shoots 52 percent from the floor, 85 percent from the free throw line and 35 percent from three so he definitely has improved his shooting and shot selection from last year. Neal puts up 7.6 points and pulls down 4.3 rebounds per game this year. He has the ability to knock down the three so whatever big is on him can't be lax on the perimeter.

3 PT Shooting: Both teams are very poor three point shooting teams on the year. Wake shoots 32.9 percent while Maryland shoots 32.7 percent on the year. However, Maryland has really been improving recently. In their past five games, Maryland has shot 48, 38, 43, 40, and 39 percent from three. Wake will have to play solid three point defense or find themselves getting burned from deep.

Free Throws: Typically what has been happening is the two teams have been relatively similar with regards to shooting percentages and the edge goes to who uses is more. Well, Wake does rely on free throws to get points more than Maryland, but right now Maryland is 9th nation in free throw percentage at 76.8 so they get the nod.

Defense: Maryland comes into the game 52nd in the country in defensive efficiency while Wake comes in 14th. Wake's defense had been hit or miss on the season and mostly misses on the road, but in their last game against Virginia, Wake held the Cavaliers to 60 points.

Depth: Ish Smith has been stepping up very well off the bench for the Deacons but other than that it's hard to find a consistent threat. Maryland has multiple players coming off the bench making contributions. Eric Hayes is a solid player getting more minutes than many of the starters. Tucker and Gregory can contribute, and if Tucker somehow has another game like he did against UNC (22 points, five three-pointers), Wake could be in trouble.

Coach: Dino has done an admirable job this season leading the Deacons to a 22-5 record overall, 9-5 in the ACC. Despite this, the coaching category goes to Maryland. Gary has won a national championship and coaches his teams very well during games. An underachieving recruiter, Williams still is able to get wins in the ACC because he can flat-out coach.

Intangibles: Maryland is always a tough place to play in general, and added to that the Terrapins are fighting for their NCAA lives right now. Before losing to Duke (in a game Maryland still had a chance to win at the end), the Terps beat North Carolina in a huge come from behind win. The Deacs struggle on the road in general and going to Maryland might be too tough of a challenge.

Overall: While the table looks very lopsided, we do put emphasis on a couple of the categories more than others. Backcourt/Frontcourt are both always very important, Defense, Coach, and Intangibles all should be important in this game. On the whole, Maryland takes the edge for this game even though Wake is coming off back- to-back wins. Maryland is fighting for their lives and we see the home court playing a big role in the outcome. Another thing to think about is how both teams will react coming in off a short break. Maryland just played Sunday night in Raleigh and have to get back on their home court Tuesday night. We can look to see if fatigue plays a role in the outcome. For Maryland, the motivation to impress the selection committee should energize the team.

Alright time to put my black and gold glasses back on and pick a Wake win in the overall Game Preview.