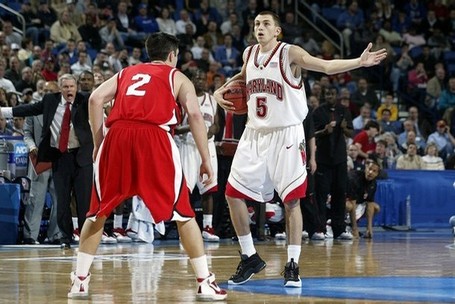 Everyone who knows me knows that I'm a bit loud when it comes to sports. I scream profanities at the TV and bother the neighbors, but at games, it's even worse. I guess a lot of it comes from the fact that college basketball runs through my veins. It's even worse lately since the last couple years I haven't had the chance to be a fan that often.

That said, I love to pick a player on the other team and really let him have it. It's easy to pick on a guy like Hansbrough, A-Rod or Kobe, but it's a lot more fun to single out Matt Causey, Lew Ford or Eduardo Najera knowing that they hear you.

Eric Hayes is one of those guys for me.

Hayes' role has been definied since the moment he came on the Maryland campus. He isn't a number one scorer. He isn't a playmaker. He isn't a defensive stopper. But that said, he is an ACC player.

He's played over 20 minutes per game since freshman year. He really stepped his game up last year, moving from 4.8 points per game to almost 10 last year. He also averaged 4.5 assists per game last year. Watching him in games, he won't wow you with his skills. He always looks like he's going to turn the ball over and he never seems like a guy who will take or make a big shot.

This year he is putting up solid but uninspiring numbers. He averages 9.7 points, three rebounds and 3.3 assists. He plays four less minutes per game this year than last but has also cut his turnovers down by .5 per game. He shoots a less than stellar 40 percent from the floor, but is an excellent free throw shooter (.860) and a decent three-point shooter (.365).

Maryland has really come on of late, showing signs of life and getting their ACC record to 7-7 after starting 3-5. They have unbelievable wins against Michigan State and North Carolina and a head-scratching loss to Morgan State--so strictly speaking, they're having a very Maryland-esque year.

In their last six games, Hayes is averaging 11.5 points, 3.16 assists, three rebounds and is shooting 54 percent from the floor. It isn't to say that Hayes is a barometer for the Terrapins, that belongs to super-chucker and blushing wonder Greivis Vasquez. But Hayes playing well helps the team--when guys like Hayes, Adrian "Space Oddity" Bowie and Landon Milbourne have good games, it masks Vasquez's erratic play and poor decision-making.

Hayes also plays the guard spot, a position the Deacs have had a lot of trouble defending. As evidenced by the play of NC State PG Farnold Degand against Wake Forest, driving guards who can keep teams honest with their outside shot have played above average games against the Demon Deacons (Case in point: Virginia guard Calvin Baker had 13 points on Saturday, five points above his season average).

I see Hayes scoring in double figures against Wake Forest, with most of his points coming off drives. This is around his season average, but he should also have an easy time funneling defenders into the lane and dishing it off to guys like Milbourne.

And since I'll be at home watching the game, I'll be doing my best to scream at Hayes the whole game. A fan has to do his part when he can.