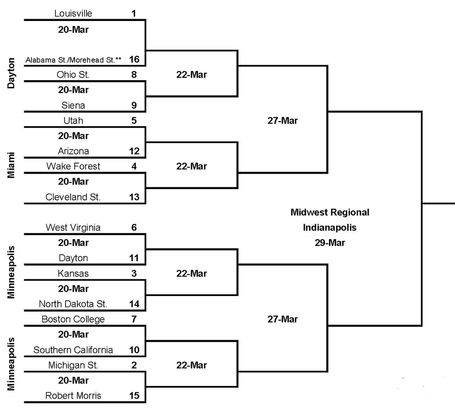 (1) Louisville vs (16)  Morehead State - The number 16 seed doesn't stand a chance against the number one overall seed.

(8) Ohio State vs (9) Siena - The Saints scheduled a tough non conference schedule but lost all of those contests. They have good senior leadership in Kenny Hasbrouck but Ohio State is led by a sensation guard in Evan Turner. Ohio State is 9th in nation in effective field goal percentage. A close match up that Ohio State will pull out.

(5) Utah vs (12) Arizona - This chic pick adds fuel to the fire for Utah. It seems like everyone is picking the big name in Arizona, but Utah will be able to neutralize any second chance points for Arizona and take down this bubble team.  On top of this, Arizona has lost 6 of their past 7 games and has no momentum going into this game.

(4) Wake Forest vs (13) Cleveland State - Cleveland State has small forwards and small guards, Maryland was able to take down Wake because of their big guards, but Cleveland State can't boast the same. They play solid defense but Wake prevails in the end.

(6) West Virginia vs (11) Dayton - KenPom has Dayton at #83 in the nation and West Virginia is an underrated 6 seed with an experienced tournament coach in Bob Huggins. West Virginia should roll behind Ruoff and Butler.

(3) Kansas vs (14) North Dakota State - The defending champs have improved dramatically over the course of the season and will encounter few problems overtaking an under matched Bison squad.

(7) Boston College - (10) USC - The emergence of DeMar DeRozan has propelled this team to a new level to compliment Hackett and Taj Gibson. Boston College has a great scorer in Rice and another solid player in Trapani but USC is on a roll and will continue that through the first round.

(1) Louisville vs. (8) Ohio State - While the Dayton crowd will definitely give Ohio State a fighting chance, Louisville's pressure defense will cause problems for the Buckeyes as Louisville advances to the Elite Eight.

(5) Utah vs. (4) Wake Forest - Since Utah is not a good offensive rebounding team and Wake has the height to neutralize their 7'2" center Luke Nevill, the Deacons should be able to shut down the Ute offensive attack.  Add this to the fact that Utah plays mostly man-to-man and Wake makes it to the Sweet 16 for a showdown with Louisville.

(6) West Virginia vs. (3) Kansas - We feel this will be a very closely contested game, but in the end Cole Aldrich will be too much for the WVU frontcourt to handle.  Bill Self continues to coach this young Jayhawk team effectively and Collins is one of the best big-shot makers in the nation.

(10) USC vs. (2) Michigan State - The Trojans are 223rd in the nation in turnover percentage according to KenPom and do not force turnovers on the other end.  A well-coached Tom Izzo team will feast on this fatal flaw of USC.

(1) Louisville vs (4) Wake Forest - Call it the Wake Forest bias but we have the Deacons knocking off the number one overall seed in this Round of 16. Wake has shown the ability all year to break the press with a multitude of ball handlers. Wake can match size and speed and after picking up a couple wins in the tournament they will have the confidence to take out the Big East champion.

(2) Michigan State vs (3) Kansas - Another tough match up for the Jayhawks. Both teams have experience coaches who know how to the win the big game which makes the game even more intriguing. These teams both can defend and are efficient offensively. A near toss up Kansas takes the edge and Collins will come up big late to push Kansas to the Elite 8.

(4) Wake Forest vs. (3) Kansas - Unfortunately, the Deacs' run ends here.  As evidenced by this bracket breakdown, we value coaching ability a great deal in our evaluations.  Dino Gaudio has absolutely no tournament experience and Bill Self won the National Championship last year.  Add this to a wildly inconsistent Wake Forest team and the Jayhawks should be able to outlast the Demon Deacons.  Hopefully at least two of the big three stick around so that Wake can make another run next season.