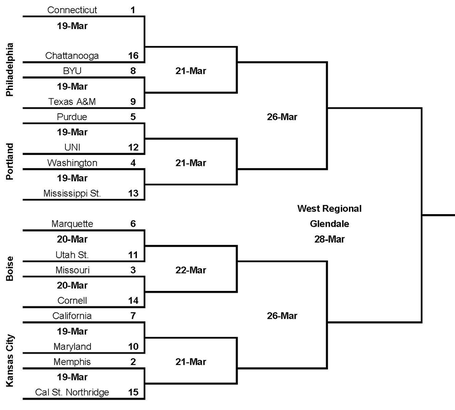 (1) UConn vs. (16) Chattanooga - The Huskies should have no problem steamrolling the 18-16 Mocs of Chattanooga who will try to be the little engine that could this Thursday.  And while trains make for a cute children's story, they're not very good at basketball.

(8) BYU vs. (9) Texas A&M - Coming out of the Mountain West Conference, the Cougars of Brigham Young haven't been showcased very much this season, but that doesn't mean they don't have talent to showcase.  BYU has only lost in regulation by more than two points three times this season, and were less than a tenth of a second away from beating Arizona St. http://www.youtube.com/watch?v=N5Z-AxK8-D8 earlier this year.  Texas A&M won't be able to stop BYU's offense, which ranks eight in the nation in FG%.

(5) Purdue vs. (12) Northern Iowa - Purdue will look to keep their momentum from winning the Big Ten Tournament going against an under-matched Northern Iowa team.  The Boilermakers defense is stifling, and if they are at full strength (which they haven't been much this season) then they are even more dangerous.  If you're a Northern Iowa fan - and I'm talking to both of you - root for overtime on Thursday.  Purdue is 0-3 in OT games this year whereas UNI has won their last two.

(4) Washington vs. (13) Mississippi St. - Although some are calling for the upset here, I just can't see Washington losing in the first round.  After a slow start to the season, the Huskies are 9-2 in their past 11, including wins against Arizona, Arizona St., USC, all tournament teams.  Washington has a well-balanced attack and will cause match-up problems for the very inexperienced Bulldogs of Mississippi State.

(6) Marquette vs. (11) Utah St. - Marquette has one of the best guards in the nation in Jerel McNeal.  Unfortunately, they used to have two of the best guards in the nation.  But after PG Dominic James went down with a season ending injury against UConn on February 25, they Golden Eagles are just 1-4, their sole win coming against an under .500 St. John's team.  Utah St. has an incredibly efficient offense and likes to slow down the pace, which should hurt Marquette's much faster, more perimeter oriented game.  Not to mention that Marquette's starting five is giving up eight inches to Utah State's starting five.

(3) Missouri vs. (14) Cornell - The Big Red is going to need a big miracle to upset the Big 12 Tournament Champions.  No Ivy League team has won in the tournament since Princeton in 1998, and they were a five seed.  Because of the Ivy League's lack of a conference tournament, they haven't play since March 7.  This means that Cornell has had over 18,000 minutes to prepare themselves for Missouri's "40 minutes of Hell."  Somehow, though, I still don't think it was enough time.

(7) California vs. (10) Maryland - Although this should be a close one, the difference in this game will be Cal's 3-PT shooting, which ranks best in the nation.  Maryland is not a great defensive team from beyond the arc, and they are just 9-11 in their past 20 games and have lost by more than 21 points four times this season.  Maryland has a reputation for upsetting big names, but I'm not sure if California fits the bill.  Too bad they didn't get Texas in the first round.

(1) UConn vs. (8) BYU - Brigham Young is really good, and an upset here isn't unthinkable, but UConn's size and defense is just too good.  BYU has an outstanding offense that is good at scoring inside, but they have never gone against the likes of 7-3 center Hasheem Thabeet.  Connecticut has an incredible ability to play hard nosed defense without fouling, which should get them through to the Sweet Sixteen.

(5) Purdue vs. (4) Washington - A lot of people have Purdue moving on here, but I like the Huskies' strong rebounding and ability to get to the free throw line.  The Boilermakers are not a great rebounding team, and if their shots aren't falling, I don't see how they will keep up offensively with a Washington attack that has four players averaging double figures.

(11) Utah St. vs. (3) Missouri - Utah St. has never seen anything like what Missouri is going to bring at them.  The Aggies have one of the slowest 25 tempos in the nation, whereas the Tigers have one of the 25 fastest.  It's going to take a lot, though, to slow down the likes of DeMarre Carroll and company.

(1) UConn vs. (4) Washington - The battle of the Huskies has go to go to the team with more bite, and that, my friends, is the University of Connecticut.  Washington has a faster style, but UConn has the experience - both in players and in coach - to get to the Elite Eight this year.  It will be tough for Washington to utilize their affinity for the free throw line against a UConn squad which gives up the fewest FTs of any team in the nation.

(3) Missouri vs. (2) Memphis - The battle of the Tigers has to go to the team with more ferocity, and that, folks, is Memphis.  Missouri might give Memphis 40 minute of Hell, but the plane ride back to Columbia, MO will be a lot longer, and possibly a lot more Hellish.  Memphis is one of the few teams in the nation that can match Mizzou's athleticism, and Missouri has never played a defense as good as Memphis' all year.  Missouri's offense is good, but Memphis's defense is better.

(1) UConn vs. Memphis - Memphis is really really good.  UConn is really really really good.  Both teams have a well established tournament coach and some fairly recent final four history.  Both teams have tremendous defenses, and in a game like this, you need a star.  Memphis has one in the making in Tyreke Evans, but he has not yet proven that he can consistently make and take the big shots.  Connecticut's A.J. Price has this quality.  If these teams meet in the Elite Eight, it will be a must see, and one of the best games of the tournament, but look for A.J. Price to get UConn to Detroit, and the Final Four.