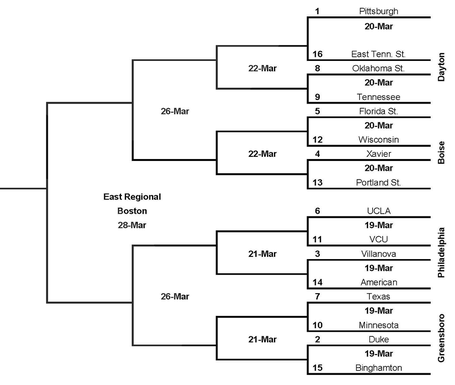 (1) Pittsburgh vs (16) East Tennessee State - In this matchup between teams rated 6 and 113 in the Pomeroy ratings, the Panthers should dominate from the opening tip.  We all know that a 16 has never beaten a 1 and that's not going to be the case here either.

(5) Florida State vs. (12) Wisconsin - This looks like a promising upset pick here because of the big name in the 12 slot and the yearly occurrence of this upset taking place, but I'm not falling for it.  This game may end up with a final score of 28-24 because FSU emphasizes defense and Wisconsin plays at one of the slowest paces in the nation.  Bob Ryan is a great coach and this game will come down to the wire, but I think the height of Florida State and the senior leadership of Toney Douglas will lead the Seminoles to victory.

(4) Xavier vs. (13) Portland State - Xavier is a top 50 team on both ends of the floor according to KenPom while Portland State is 200th in defense.  I'm all chalk so far and this is not going to be an upset either.

(6) UCLA vs. (11) VCU - VCU is paced by PG Eric Maynor who led the Rams to a tournament win over Duke two years ago.  On the other hand, UCLA has been to  the Final Four three straight years and still has the leadership of Collison and Shipp from those teams.  UCLA is a very solid six seed that I'm sure VCU was disappointed to draw after earning an 11 seed.  This may be a popular upset pick too, but I do not think Collison will allow UCLA to get bounced that early.

(7) Texas vs. (10) Minnesota - The emergence of Texas center Dexter Pittman could be a big story in this region.  The big fella had a couple huge games in the Big 12 tournament and will look to help A.J. Abrams and Damien James make a run in the NCAA tournament.  Tubby Smith did a good job getting the Gophers back to the tournament, but their turnover woes and youth in the paint may stop them from getting a win in the first round.

(2) Duke vs.(15) Binghamton - Tony Kornhesier's alma mater will look to shock the world here, but this disciplined Duke team will not let that happen.

(1) Pittsburgh vs. (8) Oklahoma State - If Oklahoma State is hitting their three point shots, they could make this one interesting.  However, the beastliness of DeJuan Blair and the vastly underrated Sam Young will carry the Panthers to the Sweet 16.

(6) UCLA vs. (3) Villanova - This is without a doubt one of the premier potential matchups in the second round.  UCLA is 3rd in the nation in offensive efficiency and, as I explained earlier, has major tournament experience even though a few of their key players are freshmen.  VIllanova has some dynamite guards as always in Reynolds, Stokes and Fisher to go along with Dante Cunningham in the paint.  I just have the feeling that Ben Howland will outduel Jay Wright and the Bruins will march to the Sweet 16.

(7) Texas vs. (2) Duke - If you would have told me this was a second round tournament game in November, I would have thought Duke really dropped off.  Instead, Texas is the one that had a disappointing season behind an inconsistent A.J. Abrams.  This game will likely come down to three point shooting, as Duke loves the outside shot and Abrams is never shy.  However, if Texas is disciplined they should be able to take advantage of Duke's inferior height.  Pittman, James, Johnson and Atchley have the length and muscle to bother the Blue Devils inside.  In the end, I see Abrams' eyes lighting up as the nation pulls for him against Duke and Texas advances.  It was about time for me to go out on a limb anyway, right?

(1) Pittsburgh vs. (5) FSU - Again, this would be a grind-it-out defensive matchup.  While the Seminoles would likely make a game of it, they just do not have enough offensive weapons to keep up with Pitt.  Blair would have more trouble with Alibi, Reid, Gibson and Singleton than in previous rounds, but Young and Fields pick up the slack and advance.

(6) UCLA vs. (7) Texas - As I have discussed earlier, KenPom loves the Bruins and I love their experience.  On the other hand, Texas has the ability to be really good and is still trying to adjust to the loss of D.J. Augustin, as evidenced by their results on the season.  I keep telling myself that Texas is a bad pick, but I just cannot resist.  Connor Atchely blocks a Collison shot at the buzzer and the Longhorns shock the nation as they play to their potential and advance to the Elite Eight.

(1) Pittsburgh vs. (7) Texas - The run ends here for Rick Barnes' club.  Pitt is too well-balanced and talented for the Longhorns.  Levance Fields is a big game player and leads this tough Pitt team to the Final Four.

Stay tuned for Blogger So Dear's breakdown of the West and Midwest on Wednesday!