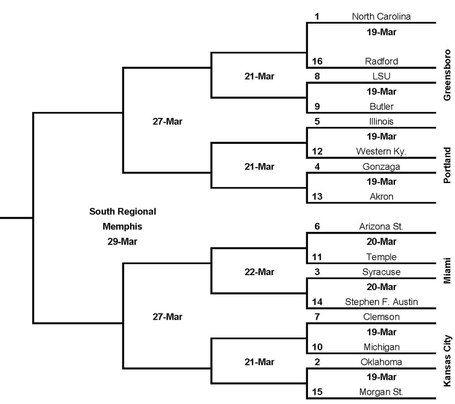 (1) North Carolina - Ranked #2 Overall by KenPom, #1 offensively and #35 defensively and is coming off an ACC regular season crown.

(16) Radford - #170 Overall and is coming in winning 12 of last 13 games. Parakhouski is a load inside and this team gave Wake Forest a little trouble earlier in the year. Despite those facts, Radford's best win is VMI who is #180 in the country. The #1 seed has never lost first round, and it won't start here.

(8) LSU - Interesting match up, the major conference teams usually come in much younger and untested, this LSU team is #22 in terms of experience according to Pomeroy. This should help LSU take down a solid Butler team.

(9) Butler - #341 in the nation in terms of experience. Butler also is #23 in percentage of points from three. LSU is #28 in the nation for three point percent defense, not a good match up for Butler there. This will be a good game where Butler will come up just short.

(5) Illinois - A slow it down team with a very good defense and an average offense. They have a very slow tempo in addition to having lost three of four coming into the tournament. This smells of an upset.

(4) Gonzaga - KenPom has Gonzaga as the #5 team in the country, combine that with two nine game win streaks around a loss to Memphis coming into the tournament.

(13) Akron - Very inconsistent coming into their conference tournament, alternating wins and losses. They even lost to Northern Illinois and Valpo, two teams not in the top 200 in the country. Gonzaga should handle this game easily.

(6) Arizona State - On the whole, the six seeds are tough this year with, Arizona State, UCLA, Marquette, and West Virginia. Arizona State is #2 in the nation in effective field goal percentage, helping them to the fifth most efficient offense in the country. Harden is a beast who can do it all for the Sun Devils.

(11) Temple - A solid 11 seed, the Christmas-Harden match up should be a fun one to watch. Temple could give Arizona State trouble but they do not defend the three well and Arizona State utilizes that facet of the game a lot, coming in at 15th in the nation in three point attempts per field goal attempt.

(3) Syracuse - After a mid-season slump, Syracuse righted the ship to win seven of their last eight, including some games for the ages in the Big East tournament. They should have little trouble dispelling the Lumberjacks.

(7) Clemson - Clemson is coming in losing four of their last five, Purnell has never won a NCAA tournament game, and none of this bodes well for Clemson.

(10) Michigan - Clemson thrives off of turnovers to spur their offense. Clemson is #8 in the nation in steal percentage. Good thing Michigan is top 20 in offensive turnover percentage, they rarely turn the ball over which will hurt Clemson's offense. The Wolverines come up with the upset.

(2) Oklahoma -Lost four of six coming down the stretch, but have too much firepower for Morgan State to match up with. Blake Griffin is a monster down low and Morgan State flat out doesn't have the talent.

(15) Morgan State - Has one good win this year against Maryland, but right now are still #139 in the nation, blow out for Oklahoma.

(1) North Carolina - With Ty Lawson playing well this team is tough to stop for anyone (which is still an unknown at this point), but right now they should handle LSU easily en route to the Sweet 16.

(8) LSU - The Tigers are #254 in the nation in forcing turnovers meaning they aren't going to stand much of a chance stopping the Tar Heels. In the three regular season losses for Carolina they turned the ball over frequently, well more than their season average.

(6) Arizona State - After taking down Temple, Arizona State gets to match up against what should be a very tired Syracuse team. Their efficiency offensively should carry them to another win.

(3) Syracuse - The Orange played admirably in their conference tournament but probably won't have enough in the tank to beat Arizona State. Syracuse likes to run and they won't have the legs to keep it up against a very good Sun Devil team.

(10) Michigan - After taking down a slumping Clemson team, Michigan will match up with an extremely talented Oklahoma team. The Sooners have too much talent across the board for the Wolverines.

(1) North Carolina - UNC will finally get challenged after coasting through the first two rounds. Gonzaga has tons of talent and led the nation point differential at 17.6 per game, but UNC has been tested far more frequently and will pull out the win.

(4) Gonzaga - A good run for the Zags, but their best win on the year was at #31 (KenPom) Washington State. They lost to Memphis, Connecticut, and Utah. Add another top team that Gonzaga will fall to right here.

(6) Arizona State - Neither of these teams were playing all that well to end the season so it will take a big turnaround but both these teams have the talent to make it here. Arizona State is taking a tough road but I see it continuing to the Elite 8.

(2) Oklahoma - According to KenPom, Arizona State has a more efficient offense and defense. Blake Griffin can only carry this team so far. Warren will really have to step up if Oklahoma is to beat Arizona State. Call me crazy but I see Arizona State making a magical run to next round.

(6) Arizona State - Will fall just short to a superior team after Harden leads this team all the way to the Elite 8 in Memphis.

And there it is, your Final Four team from the South Region will be North Carolina.

Check back for a breakdown of the East region later tonight and the final two on Wednesday!