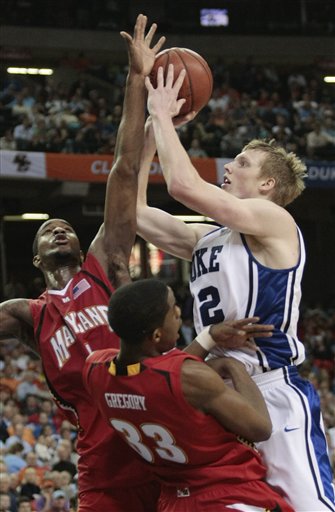 Maryland certainly helped their NCAA chances by beating Wake Forest yesterday, but they couldn't make themselves a lock as they fell to Duke by a final score of 67-61.

The Terps were undone by poor shooting the entire game (39 percent) and by Duke's strong perimeter shooting. Maryland Head Coach Gary Williams mixed zone with man-to-man, but when they went zone, the Blue Devils made the Terrapins pay.

Duke was led by Jon Scheyer, who had 22 points on 6-12 shooting (4 for 10 from three-point land). Kyle Singler also had a good game with 14 points and 11 rebounds. Gerald Henderson, who struggled a bit yesterday, had a rough game today as well, with just eight points on 3 for 14 shooting.

Maryland had a late comeback bid led by Eric Hayes who scored a bunch of points in a row to help keep the Terps in it, but Duke was able to make just enough foul shots to keep the game out of reach.Hayes had 20 points for the game.

Greivis Vasquez was bad Greivis, going six for 17 with four turnovers. When Vasquez has a poor shooting night, the Terps lose, as he is their floor general and makes them go. Players like Dave Neil, Adrian Landon Milbourne and Sean Mosley (who had a solid performance with eight points and six rebounds) are decent role players, but none of them can carry a team.

Maryland will be watching very closely on Selection Sunday, but with all the other teams falling around the country, my bet is that they will be in and the ACC will have seven teams in the Dance.

The finals should make for a great game, as Duke will take on Florida State. The Seminoles appear to be on a mission and will make it extremely tough for the Blue Devils with their length and size. The Blue Devils will need to use good defense to turn FSU over and get easy transition buckets. Coach K will want to play an up-tempo game to get the 'Noles out of their comfort zone.