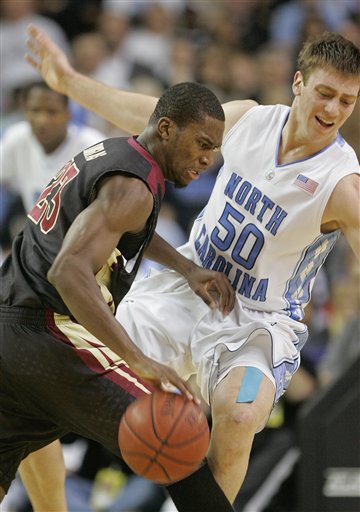 Although never mentioned publicly, one has to believe that Florida State guard Toney Douglas felt slighted when North Carolina guard Ty Lawson was named ACC Player of the Year. On Saturday in the semi-finals of the ACC Tournament, the Seminoles beat the Tarheels 73-70 and Douglas got to show the whole conference and the nation why he truly deserved the award while the conference's official Player of the Year sat the bench with a toe injury.

Douglas had 27 points on 10-18 shooting in a close win against the Tarheels. When it came down to the wire, he hit his free throws and played velcro defense on Ellington on UNC's last possession to give the Seminoles the victory.

The 'Noles move on because of gutsy performances from freshman Solomon Alabi, who is making his case to be named to the All-Tournament team, with 11 points and five rebounds. Derwin Kitchen, yesterday's hero had 11 points, nine rebounds and six assists along with three steals.

The Tarheels were paced by Tyler Hansbrough's 22 points, 12 of which came off of free throws. (I guess Roy can't complain that his boy didn't get to the foul line enough today. Danny Green struggled again, going 1-12 from the floor, but he was picked up by Wayne Ellington, who has been a beast in the ACC Tournament his whole career. He had 24 points on 8-17 shooting and 4-9 from three-point land.

FSU played tough, physical basketball and it showed as they crashed the boards and got a lot of putbacks. They also got a lot of open looks from beyond the arc, hitting them in the second half by shooting 6-11. They were 8-20 on the game.

Carolina on the other hand shot just 27 percent from distance and 37 percent on the game. They shot 14 more free throws than the Seminoles, hitting 13 more, which was what really kept them in the game.

The Tarheels are still a number one seed, but Florida State will move on to the finals to take on the winner of the Duke-Maryland game. The 'Noles look to improve their seeding even more with this win and an ACC Championship would move them even higher. For now, Douglas can take solace in the fact that he made a statement about who really was the best player in the ACC this season--and he doesn't have a boatload of McDonald's All-Americans around him.