ACC Tournament: Duke vs BC Recap

Share All sharing options for: ACC Tournament: Duke vs BC Recap 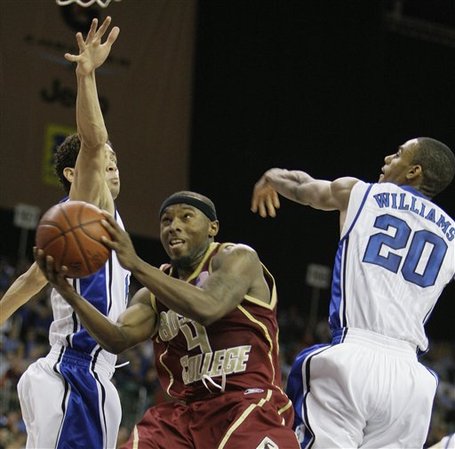 After an afternoon of almost buzzer-beaters, it was only fitting that the battle between the Duke Blue Devils and Boston College Eagles would take all 40 minutes to decide the outcome.

BC found themselves up seven at the half and down in a hole in the second half but bounced back using a combination of nifty drives by senior Tyrese Rice and some strong shooting from Biko Paris and Joe Trapani.

Paris nailed a three to tie the game up late in the second half and it was back and forth from there. BC had the ball and a bunch of time to get a good shot off but Duke played great defense before the timeline forcing BC to take another timeout. Out of the timeout though, Rakim Sanders, who finished with seven points on 3-12 shooting and 1-7 three-pointers, hoisted up a prayer three ball and BC had lost. For all those timeouts and all that time, BC had to get a better shot than that. Why not go to Rice (17 points, four assists), who can finish around the tin and could possibly get a foul call?

Paris and Trapani combined for 15 and 12 respectively, but the real story for Duke was Kyle Singler who had 26 points on 10-15 shooting. Singler has struggled mightily as of late and needed a big game for Duke as they look forward into the NCAA Tournament. They especially needed it on a day when Gerald Henderson was not at his best (5-12, 16 points, three TOs).

Jon Scheyer hit four threes and Elliot Williams played solid defense again and Duke will take on a possessed Maryland team on Saturday. If tomorrow's games are as good as three of the four games were today (the Wake game notwithstanding), then the semis will be another ACC classic.